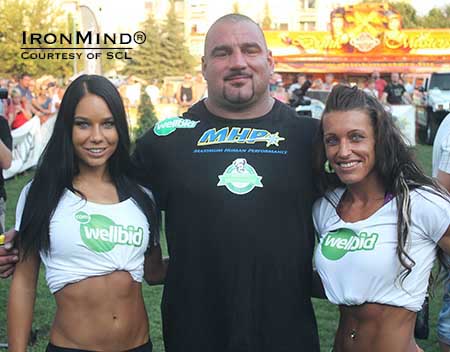 Wellbid, the latest SCL sponsor, “belongs to the entertainment shopping segment on the Internet,” Marcel Mostert told IronMind.  “They are a new side sponsor who came in for the League until the end of this year with an option for 2014.”  IronMind® | Courtesy of SCL


Mostert said it was a “thrilling battle between Ervin Katona, SCL Leader Krzysztof Radzikowski and Meelis Peil from Estonia and 10 other athletes in a sunny weather of 25 degrees [and] the crowd was fantastically enthusiastic.

“By winning the first event, pulling a 14-meter long limo over grass, Ervin Katona showed that he came with a mission: To win the title and to get his yellow leader shirt back.

“Only 11 ranking points between him and Krzysztof Radzikowski was the gap so far and Ervin did succeed in his mission: in his original country he won the MHP Strongman Champions League Hungary 2013 and Krzysztof became second overall, losing only 7 points in the ranking to Ervin.  So this means that Krzystof can start coming weekend again in the yellow SCL leader shirt in SCL Slovakia, with only 4 points ahead of Ervin.

Next stop: SCL Slovakia on September 7.