The hot, humid weather gave the strongman competitors an extra challenge at SCL–Buglaria this weekend, but didn’t stop the show - Ervin Katona walked away the winner, as Marcel Mostert called the action for IronMind®. 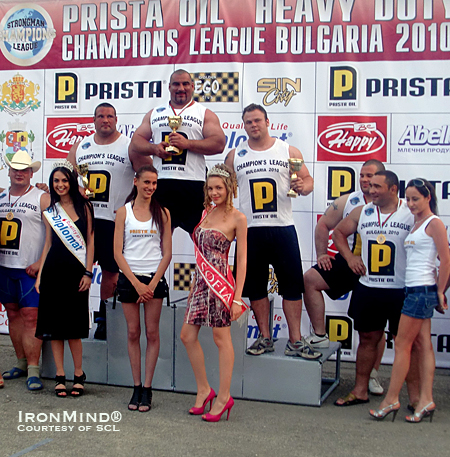 Last Sunday, the battle in the 5th SCL this year started in the capital of Bulgaria, Sofia, in a hot and steamy weather with 40 degrees!  It was an extra handicap for the athletes, but luckily all finished well and without any injuries, and that is very important for us.

Terry Hollands seemed to have problems with the hot weather. After taking the lead at the start, he got dizzy during the log lift.  And in the 5th event, the Conan’s Wheel, he even fell down because of cramps, which is not strange in this hot weather and for such a big giant of 180 kg.

It gave Ervin Katona, who followed on his heels during the competition, the opportunity to take the lead, and that gave Ervin wings to win the last event, where he even beat the Texas Stoneman, Travis Ortmayer, in the Atlas Stones by 0.10 of a second.

It was just a pity that Stojan Todorchev, the local Bulgarian strongman, just didn’t show up without any reason to compete with some best strongman of the world.  Strange and very unprofessional.  He was invited by the Bulgarian Strongman Federation and Miron Jordanov.  Many thanks as well to Miron who provided us with the best hotel and food in Sofia!

And again we are packing our bags, this time for the 6th stage of the Strongman Champions League, already to come next week at 20 June in Holland, so stay tuned for the athletes and event list, later this week.