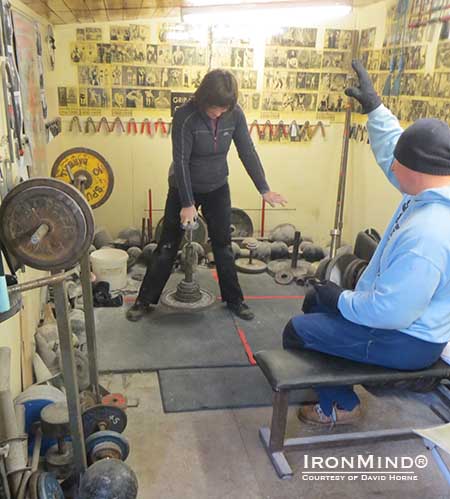 Elizabeth Horne knocked the women’s world record on the IronMind Hub out of the park with this 25.33-kg lift at the 5th British Hub Lifting Championships.  IronMind® | Image courtesy of David Horne

“It was a fun day’s events, with new lifters competing alongside the more seasoned competitors,” David Horne told IronMind.  “Only three competitors wanted to tackle the Hub Champs, which we started first. But very good lifters they are.
“On another day, Chris Lowe can get up towards that world record I believe, as he’s only just come back from some very serious surgery to his face and body!  Jerome Bloom lifted 26.87 kg at a bodyweight of 65.9 kg, which is a fantastic lift for someone so light.”