Managing Director Johan Erling told IronMind that Eleiko has been selected as the official barbell for the 2006 Asian Games, in what must be regarded as a particularly dramatic achievement for the Swedish company as more and more Asian barbells enter the market. 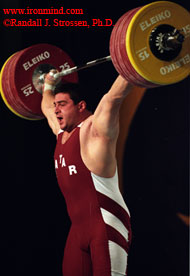 Eleiko barbells, widely regarded as the standard by which all other barbells are judged, were just used at the 2005 Asian Weightlifting Championships, and will be used at the upcoming 2005 World Weightlifting Championships - contests where it is expected that close to 600 pounds will be dropped, maybe repeatedly, from arm's length overhead, as the world's strongest super heavyweights defy gravity and put barbells to their ultimate test.