Garrick Daft wasn’t kidding when he called it a “very difficult pull,” as only three competitors finished the Budweiser Truck Pull - kicking off Day 2 at the America’s Strongest Man contest. 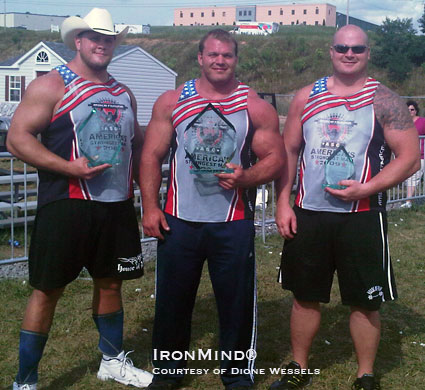 Travis Ortmayer held on to the momentum he had established when he won the final event in day 1 - the stones for height - as he won this opening event on day 2.  Andy Vincent was second, Derek Poundstone was third and “nobody else finished the course.”

Next up was the GMC Canyon truck deadlift, which Derek Poundstone won with 18 reps; Travis Ortmayer and Van Hatfield tied for second with 14 reps.  Andy Vincent, who had gotten zero reps on the deadlift bounced back on the axle clean and press (330 lb.), winning the event with 10 reps.  Poundstone was second, with 9 reps, and Ortmayer was third, with 8 reps.

The last event was the atlas stones and the Texas stoneman - Travis Ortmayer - showed his prowess on the stones again, notching another win.  Vincent was second and Poundstone was third.

Wondering about Andy Vincent?  “Andy Vincent is a former NFL player,” Garrick Daft reported to IronMind®.  “Played for the Miami Dolphins in 2001 and the Detroit Lions in 2000.  He is in the process of moving from Louisiana to Houston, Texas.  Once in Houston,  he will join forces with Travis Ortmayer to take their strongman training to the next level.”

Garrick also commented on Marshall White’s strong performance: “He credits his recent move to Colorado and the high altitude training for helping his performance.”

ASC president Dione Wessels told IronMind®, “This was definitely the best America's Strongest Man® yet.  There were over 10,000 fans in the audience. The fans were engaged.  The contest was a true test of overall strength, will, and determination.  Derek competed like a technical machine!  Travis had a difficult start on day one, but it was the real Travis Ortmayer on day two.  If he can put together two good days, like his day two, he will be unstoppable.  Andy Vincent was impressive on his first pro show.  Making the podium in this field is extremely impressive!”