For the second time in just days, a top strongman competitor has announced that politics will no longer limit where he competes, and showing that his words are backed by his actions, Derek Poundstone told IronMind® today that it's true: He will be competing at the WSMSS Mohegan Sun Grand Prix next week. 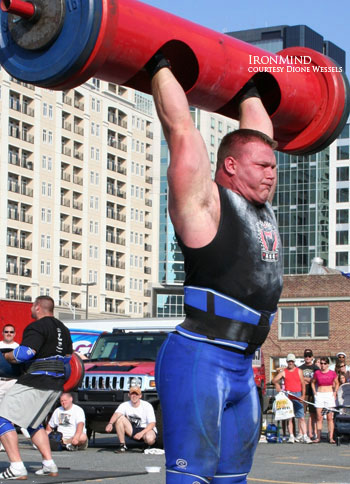 He produced a dazzling performance at the 2007 IFSA-USA/ASC championships and a top finish at the 2007 IFSA World Championships, but that won't stop Derek Poundstone from competing at the WSMSS Mohegan Sun Grand Prix next week. IronMind® | Photo courtesy of Dione Wessels.


Poundstone is more that just the 2007 IFSA USA/ASC champion - he is the guy who was in second place in the 2007 IFSA World Championships until the last event . . . which dropped him to fourth overall.

Derek Poundstone confirmed for IronMind® that two days ago he had gotten the call from Odd Haugen, inviting him to join the field at the WSMSS Mohegan Sun Grand Prix, filling the hole left by Kevin Nee's forced withdrawal due to injury.

Poundstone could hardly contain himself because he lives less than an hour from the Mohegan Sun and he said that he has really wanted to be in this contest for years, but due to his IFSA association, he could not compete in a WSMSS event. The WSMSS Mohegan Sun Grand Prix is a contest that is big in its own right, but it gains even more stature since it is a qualifying event for TWI's World's Strongest Man contest.

"With Kevin injured, they needed a 12th competitor," Poundstone said.

"I'm done playing politics," Poundstone told IronMind®. "From now on, I'm doing whatever competitions I want to do and if I qualify for World's, I am going."

Poundstone said that it's been hard for him to feel as if he's in the shadows of strongman, since the IFSA contests do not have TV coverage that compares to the World's Strongest Man contest. "I tell people that I'm a top strongman and they say to me, How come I never see you on TV? I see these other guys.' "

Also grating on his nerves, Poundstone explained, was the way he was pressured on Fortissimus: After giving his word to Paul Ohl that he would compete in Fortissimus, Poundstone said that IFSA made it clear that they did not support this contest, putting him in a very difficult position.

"I gave my word," Poundstone said. "When you die, what do you have besides your word? That's your legacy."

Explaining this further, Poundstone told IronMind that he felt that he was being drawn into the middle of a fight and that he didn't want to be there, so guess who's not toeing any more party lines?

And what should we expect when Derek Poundstone joins the fray at the WSMSS Mohegan Sun Grand Prix on January 19th?

"It's going to be a battle," Poundstone said, adding that he doesn't want to let down the guys he used to compete with by turning in a poor showing. And for the guy who led Zydrunas Savickas and Mikhail Koklaev with one event remaining in last year's IFSA World Championships, what's he think of the predictions that he might be the person to beat Polish superstar Mariusz Pudzianowski?