Sofia, Bulgaria - With the two top contenders in the men's 69-kg category at the European Weightlifting Championships today being Demir Demirev (Bulgaria) and Ferit Sen (Turkey), the battle on the lifting platform was backed up by the vocal crowd filling the hall. 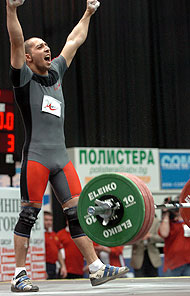 Demirov was lighter, but he didn't need his bodyweight advantage to secure the victory because he snatched 145, missed 150, and then came back to make it, while Sen made three good lifts, but finished with 147.5 kg. The partisan Bulgarian fans left no doubt about who they wanted to win, and after the snatches had ended, the competition hall was throbbing with excitement.

In the clean and jerk, Sen started before Demirev, making a good lift with 170 kg. Demirev hit 175 for his opener, and Sen made the same weight on his second attempt. Going for first place, Sen called for 182.5 kg on his third attempt, while his appearance on the platform was greeted with boos. He cleaned the weight, drove it up, and despite a valiant effort and a deep split, he could not fix the bar overhead, Demirov wasn't content to quit now, even though he had won, and he took 185 kg on his third attempt, for a success that was roaringly approved by the crowd. And if they needed another reason to be happy, Mehmed Fikretov (Bulgaria) got the bronze medal in the total via 135/177.5.