Dave Morgan, the only athlete to win gold medals at five Commonwealth Games, is not resting on his considerable weightlifting laurels now that he's north of 40. 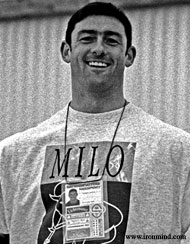 Inspired as a youth to start lifting weights, David Morgan had an exceptional career in weightlifting - especially noteworthy since he is British, and the traditional powers in weightlifting hailed from the former Soviet Bloc countries.

Morgan's early training benefited from the input of such longtime Iron Game figures as Wally Pullum, and for his part, Morgan stands out for both his performances on the lifting platform and for his constant search for more and better training information - a penchant that has not only served him well in his own career as an athlete, but has also been extremely beneficial for the many personal training clients at his InTraining facility located in Cambridge, England.

Morgan will be competing in the 85-kg category for +40-year-old lifters, and since he is coming into the competition with training lifts that put him on track to exceed the current Masters' Games records, watch for him to turn in an outstanding performance.

The current world records in Morgan's age-bodyweight class are 137.5-kg snatch, 160-kg clean and jerk, and 292.5-kg total, and they are likely to feel pressure when Morgan lifts next week.