In the last few weeks, Dan McKim has won the 2013 IHGF World Championships and the 2013 US Invitational Heavy Events Championships, and this weekend he added the crown from the Estes Park Highland Games to his collection. 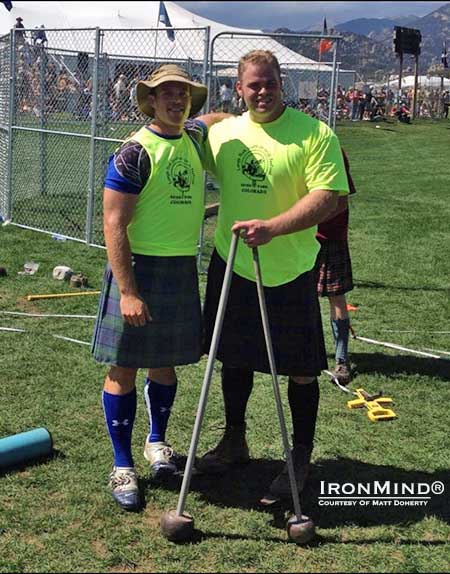 It was a smashing day at the Long Peak Scottish Irish Festival this past weekend in Estes Park, Colorado, as the newly crowned 2013 IHGF world champion Dan McKim kept up his dominating performance by winning overall and setting two national records in the 16-lb. and 22-lb. hammers, and coming within inches of the world record on the 22.

Next up were the hammers, starting with the 22-lb., and McKim had already thrown a new national record of 125’ 10” in Antigonish, Canada at the IHGF World Team Championships in July; then at the end of August, at Dana Point, California at the IHGF World Highland Games Championships, he had had a series of throws with the heavy hammer all over 123’, the likes of which had not been seen Australia s Matt Sandford, the Wonder from Down Under, back in the late 1990s.  The handwriting was on the wall for McKim as he knew that this season his hammers had never been better and he was within striking distance of the world record.

The 20-lb. sheaf was won outright by McKim at a height of 31’; a four-way tie for second between Williams, Betz, Stewart and Burchett occurred at 29’.

Williams spun his way to victory in the 56-lb. weight over the bar, with McKim in second at 17’ standing and Betz third at 16’ 6”, also standing.