Dan McKim rocks on in the Highland Games world, as he bagged the 2014 Longs Peak Highland Games title in Estes Park, Colorado; Francis Brebner reported on the action for IronMind. 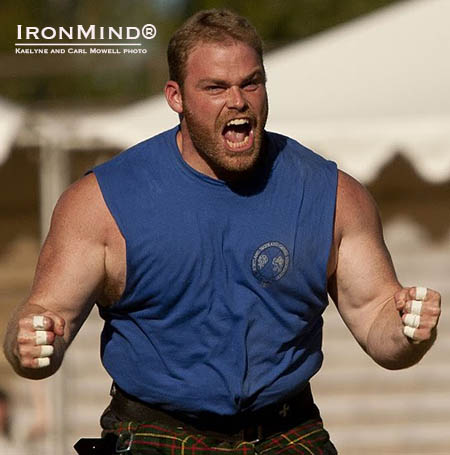 An exultant Dan McKim celebrates another Highland Games victory as he added the Longs Peak title to his collection of victories in 2014. IronMind® | Kaelyne and Carl Mowell photo

In the 16-lb. hammer, McKim was in a realm of his own as he let fly with a magnificent throw just shy of 150’, a best of 149’ 5”.  Second place was a battle all the way with Doherty holding on until the last round with a best of 141’, which ended up placing him fourth.  Both Sullivan and Vincent upped the ante in their final attempts with Sullivan clinching second place at 142’ 8-1/2” and Vincent just inches behind at 142’ 4” for third.

Burchett dominated the 20-lb. sheaf toss at height of 34’; second was a tie between McKim and Vincent at 30’.
The final event, the 56-lb. weight over the bar, was epic to say the least as three athletes succeeded at the final world class height of 17’.  On countback, Williams was the victor with fewer misses, with McKim second and Doherty third.

Asking McKim about the event on a whole he said, “As always, [it was] an amazing and supportive crowd that pushed us all throughout the day as it was a close battle for the overall. It’s hard to beat throwing at the foot of one of God’s greatest creations, the Rocky Mountains!”