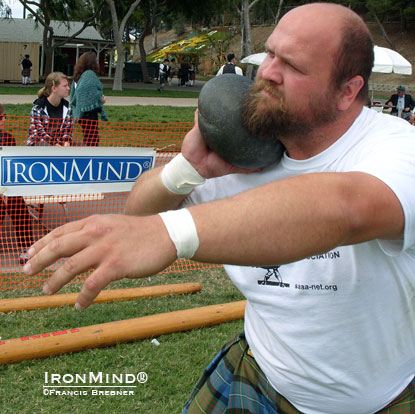 The Costa Mesa Highland Games in Southern California this past weekend attracted bumper crowds of more than 30,000 spectators over its two days of festivities and sporting events. More than 80 athletes turned out to compete in the sunny, tropical weather, which was just perfect for the big numbers thrown and the world records set in the master’s division.

The first event, the 23-lb. Braemar stone, got underway, and Price, who had been training hard this past winter under the guidance of his mentor Vierra, was definitely in the zone.  Twice World Stone Putting champion, Price won this event easily with a distance of 41’ 7-1/2”.  In second place was McKim with 40’ 1-1/2”, and in third, Betz at 39”.

At this point, the SAA introduced its multi-caber tossing attempt:  the most cabers ever to be tossed at any one time.  Last year 21 cabers were tossed simultaneously by 21 athletes.  This year’s attempt was done by 30 athletes, who set a new world record and was a sight to behold—and a smash hit for the thousands of spectators watching.

The competition caber, which was 18’ 10” long and 107 lb., proved to be an easy caber to turn and it ended in a shoot-out between three athletes, who each nailed 12:00.  Betz won on countback, followed by Williams in second place and Price in third.

The final event of the first day was the 56-lb. weight over the bar.  Nearly all athletes used the spinning technique, with McKim the only pro using the traditional standing style of throwing.  Betz spun and won with a clearance of 18’, with McKim thrilling the crowds with a world-class standing throw of 17’ for second place.  Third place was a tie between Pockoski and Price at 17’ via the spinning method.

The 20-lb. sheaf toss turned out a real slugfest between Bailey, Betz, and McKim, who each cleared 32’.  McKim won on countback, with Bailey taking second and Betz third.

The final event with the challenge caber, which was boasted to be the biggest in the country at 17’ 2” long and 167-lb., proved a real challenge for many of the world’s best athletes.  McKim, the current IHGF World Caber champion, looked like Samson from the Bible as he supernaturally made easy work of this caber with three successful tosses, including a 12:00.  In second place was Pockoski with 9:45 and in third, Vierra with 85 degrees.

Asking Vern how he felt after achieving three world records in one day, he said, “I just can’t take it in.  I am so happy.”

As to any special training he has been doing leading up to the Games, Vern said that he has been working a lot in his large garden, building stone walls by hand and also laying brick, which require a lot of bending and stretching; he noted, “I think this might have helped me in my efforts here today.” 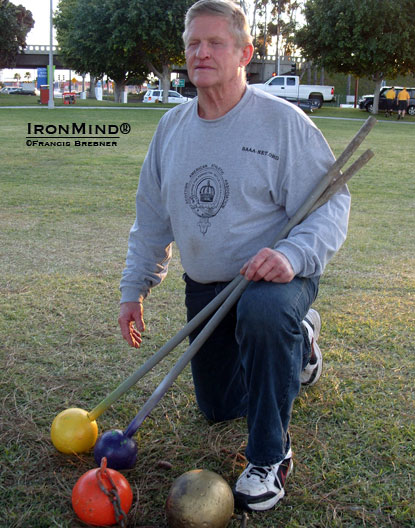