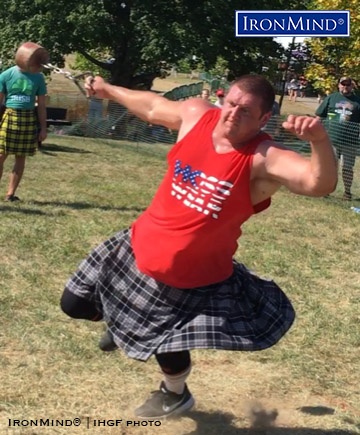 Garrett Blatnik on his way to winning the Men’s A class at the 2019 Dublin (Ohio) Irish Festival Highland Games, where he edged out Jared Conklin on countback. IronMind® | IHGF photo

Garrett Blatnik and Jared Conklin took things down to the wire in the men’s A class at the Dublin (Ohio) Irish Festival Highland Games, and Jessica Bridenthal set a new world record as part of her overall victory in the women’s class.

The Dublin Irish Festival is the largest of its kind in the world and still growing, celebrating its 35th year in 2019 with more than 100,000 spectators over the three days of Celtic festivities in Coffman Park, Dublin, Ohio.   Athletic director Robert McKeeman, along with Rich McClain, Josh Beatty, and their crew did an exceptional job of running the events and making the eighth leg of the IHGF All-American Highland Games qualifying series for both the men’s and woman’s A groups a huge success, with everything running like clockwork.

Conklin owned the 22-lb hammer, the only athlete throwing over 100’ with an impressive winning throw of 106’ 2-1/2”. Blatnik and Thomas slugged it out for second, with Blatnik pulling ahead at 96’ 2”, leaving Thomas in third at 95’.

In the 56-lb. weight over bar, Blatnik and Aston put on a great show, thrilling the crowds, with Blatnik clearing an incredible 17’ for the win. Aston did 16’ and Conklin was third at 15’.

The 20-lb. sheaf was won by Blatnik, who cleared 30’ for the win. Second was a tie at 27’ between Pfeiffer, Spence, Thomas, Sauer, Aston, and Conklin.

The 28-lb. weight over bar was fantastic as Bridenthal, Adams, Rhodes, and Kuestner all tied at 16’. Wilson and Kroll did 15’.

In the 10-lb. sheaf over bar, Bridenthal thrilled the crowds with a world-record breaking performance at a height of 35’ 6”. Adams did 32’, and third was a three-way tie at 26’ between Kuestner, Wilson and Kroll. 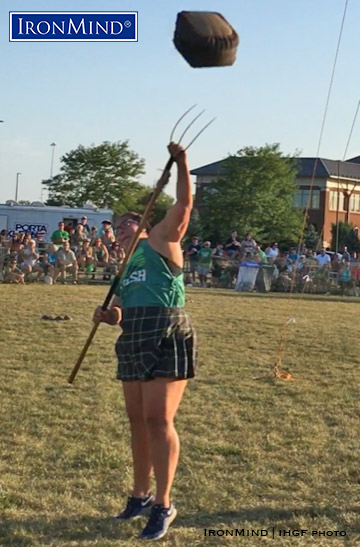 Jessica Bridenthal broke the world record for the 10-lb. sheaf over bar, as part of her overall victory in the women’s class. IronMind® | IHGF photo