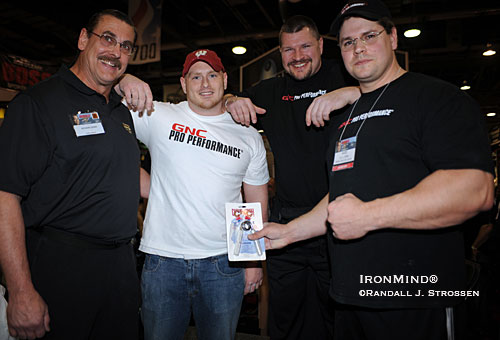 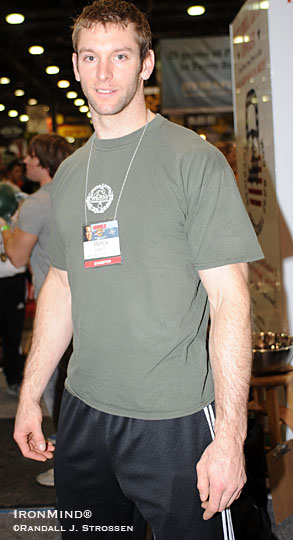 Among his accomplishments, Andrew said he holds "the record for most snatches by an American in competition at 147 reps. Grip strength definitely plays a part with this ability," he added. IronMind® | Randall J. Strossen photo.


The energy level at the Arnold tends to be off the charts, and one of the nuclei in the Expo Hall is the GNC Grip Gauntlet, the big dog of the grip contest world, so every March, IronMind®, with the tremendous support of GNC Pro Performance, offers the perfect setting to anyone who's truly ready to prove himself as a gripmaster by getting certified on the No. 3 Captains of Crush® Gripper.

And this year, two guys showed they had the right stuff: Chris Mathison and Andrew Durniat proved they were the real deal, two guys who have world-class grip strength.

Chris Mathison is an amateur strongman, who has his eye on hitting the top ranks within a few years. Andrew Durniat competes on kettlebells, and one of his goals in 2008 is to complete 200 snatches at the World Championships.

Congratulations guys - you're now certified on the No. 3 Captains of Crush® Gripper, and your names have been added to the official Who's Who list.