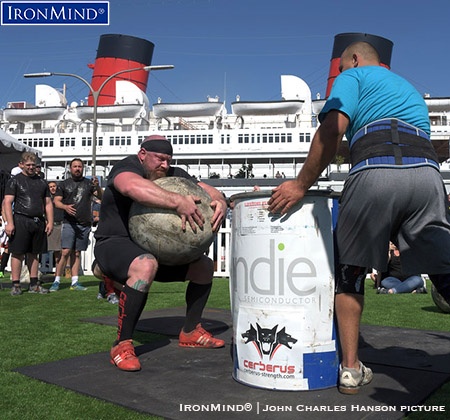 The Queen Mary Highland Games was the second qualifying leg in the IHGF All-American Stones of Strength Series. Chris Burke and Liefia Ingalls, the current IHGF Stones of Strength men’s and women’s world champions, thrilled the crowds with their herculean strength.

Men’s competition
For the men, Chris Burke, Nate Garcia, Dale Holthaus, Cameron Hansen, and Nick Moore made up the group. In the overhead stone press, athletes could choose between a 230-lb. or a 200-lb. stone, one rep done on the 230-lb. stone beat any amount on the 200-lb. stone. Garcia managed a respectable 4 reps with the 200-lb. stone, which was surpassed by Moore with 5 reps and Holthaus with 6 reps. Burke dominated by banging out 1 rep with the 230-lb stone for the win.

In the 350-lb. stone carry, athletes lifted and carried the stone over a 100’ course in the fastest time. A close run between the top three athletes, the win went to Burke with the fastest time of 14.56 sec. Holthaus was second at 16.60 sec. and Hansen third at 17.50 sec.

In the 300-lb. stone to shoulder, athletes lifted the stone from the ground to shoulder and back to the ground, repeating for as many reps as possible in 60 sec. Burke did 6 reps for the win, with Garcia at 5 reps. Tied in third place were Hansen and Holthaus with 3 reps each.

In the final challenge with the 460-lb. Atlas stone onto the barrel for time, most athletes broke this monstrous stone a few inches off the ground, but Burke lit up the crowd by lifting the stone onto the barrel in 35 sec. to set a new IHGF world record for the heaviest stone lifted at an IHGF event.

Women’s competition
In the women’s Stones of Strength qualifier, Liefia Ingalls, Sherri Fontes and Nadia Stowers made up the field. Ingalls notched up the first two wins, in the overhead stone press with 3 reps with the 150-lb. stone followed by the win in the 230-lb. stone carry for time.

In the men’s group Burke and Holthaus will join Casey Garrison and Michael Stroozas, and in the women’s group, Ingalls, Fontes and Stowers will compete in the finals of the men’s and woman’s IHGF All-American Stones of Strength Championships in San Clemente, California, October 10–11. 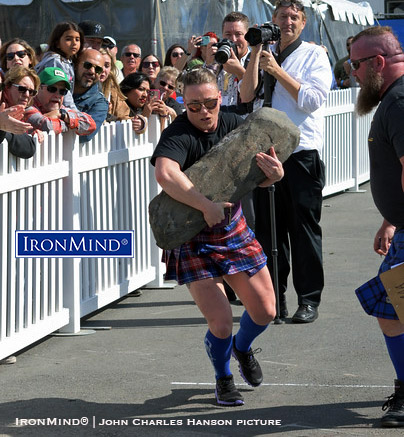 Liefia Ingalls on her way to victory on the stone carry at the Queen Mary Highland Games, where she won the IHGF Stones of Strength qualifier. IronMind® | John Charles Hanson picture