Author Paul Ohl told IronMind, “The year 2013 commemorates the 150th anniversary of the Canadian legendary strongman Louis Cyr [and] it kicks off with the publication of a special edition of Louis Cyr’s biography, a joint venture between Les Éditions Libre Expression, the publisher of the original book, and Christal Films, the producer of the movie to be released on this coming July.” 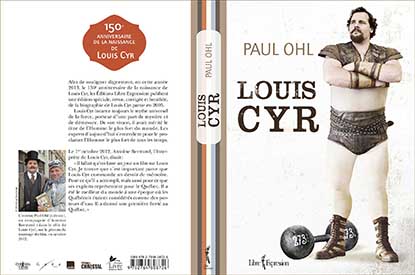 
“The cover of the book features Antoine Bertrand [who plays Cyr in the film] striking the traditional Louis Cyr’s strongman pose.  The book adds three new chapters, all about modern strongman, plus a final chapter titled ‘the strongest man of the 20th century.’

“A substantial number of Louis Cyr’s great lifts and performances, such as the the holding of pairs of horses will be featured in the movie,” said Ohl.