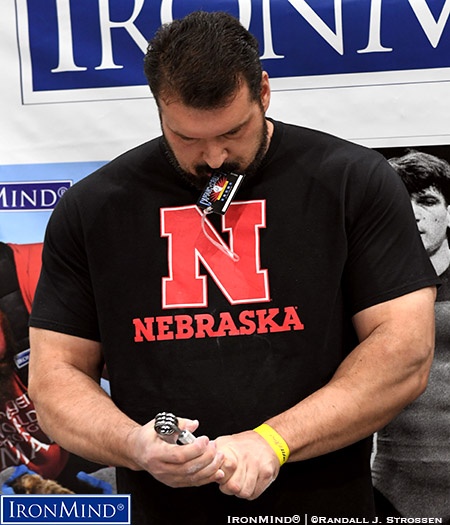 CoC card in mouth, CoC No. 3.5 gripper in hand, the stage is set and Carl Myerscough is about to lay into this fearsome gripper under official conditions. The last time it was officially closed was in 2015. IronMind® | ©Randall J. Strossen photo

Standing 6’ 10” tall and weighing a remarkably-trim 352 lb., Carl “The Blackpool Tower” Myerscough is shaking up the grip world: he’s just been certified on the Captains of Crush No. 3.5 gripper, has his sights fixed on the CoC No. 4, and how he trains is going to give a lot of grip guys pause.

By way of introduction, Myerscough won the UK shot put title ten consecutive times, and he holds the British record in the shot put (71’ 11”). He medaled twice in the Commonwealth Games (shot put 2002, discus 2010), competed in four IAFF World Championships and was a 2012 Olympian.

Myerscough attended college at the University of Nebraska and that’s where he ran into IronMind: “I could close the [Captains of Crush gripper No.] 2.5 the first time I tried,” he said.

Coming into his attempt to close the Captains of Crush No. 3.5 gripper under official conditions, Myerscough told IronMind, that he had first closed it in August 2017 and since done it 3 or 4 different times, but had not tried it recently. “I can close the No. 3 anytime, given a warm up,” he added.

Myerscough’s athletic background, along with his success, should lend substantial heft to his training philosophy.

“I train four days a week and do grip-only workouts twice a week,” he said.

“I usually do a thick bar day; this includes several sets of Axle deadlifts, usually for 3 reps, followed by Rolling Thunder curls and several wrist exercises using the Rolling Thunder handle on a pulley machine, plus some additional arm work.

“My second grip day starts with grippers in the following rep scheme:

“This is my last workout before certifying on the 3.5. The last two sets are to failure—everything else is build up. I always credit card set the first rep and then open my hand back to that approximate width on the subsequent reps. N.B. I could do much more than 19 with the 2.5 if I wasn’t doing it after the 8 reps with the No. 3.

“After grippers I do 6 sets of 6 on the Titan’s Telegraph Key. Then some work with Hammers, followed by heavy Expand-Your-Hand Band extensor work," said Myerscough.

“It took me one year of training to go from closing the No. 3 to the No. 3.5. I do not underestimate how hard and long a road it will be to get to the No. 4 but I plan to whole heartedly plow ahead with achieving it. I have refined my training program over time and have seen good improvements the last few months, so I do believe I can do it.

“I feel training with grippers through the full range of motion not only is the most effective way to improve at closing them, but also has more carryover that way to other grip events. I view them as a training tool first and foremost.

“I have found that to improve at fully closing a gripper I must fully close my training reps. I think it is very important to do all training reps from the credit card set position. If you start from a deeper set point than this the gripper handle will never be in the same place on the fingers as a full rep. This then practices the wrong movement and motor unit recruitment pattern and will not transfer well to doing a close from a credit card set. I have tried doing partials but have had more success when I went to full reps.

“I feel that negatives are unnecessarily dangerous and take too long to recover from. I think there is a tendency with grippers to take too little rest between sets as they don't make you out of breath like squats, etc. where it's obvious the rest is needed. I have found though that by waiting even though I don't feel any different my performance is much higher with 3 minutes rest between all training sets.

“I do not know why, could only guess, but since adding heavy Titans Telegraph Key training after grippers my progress took a jump. I do 3x6 with thumbs on top and 3x6 with fingers on top. It's the fingers on top ones that I feel are helping the grippers. Thumbs on top for pinch training,” Myercough told IronMind.

Many thanks to Clay Edgin for refereeing Carl’s attempt—congratulations, Carl: it’s official, you have been certified on the Captains of Crush No. 3.5 gripper! 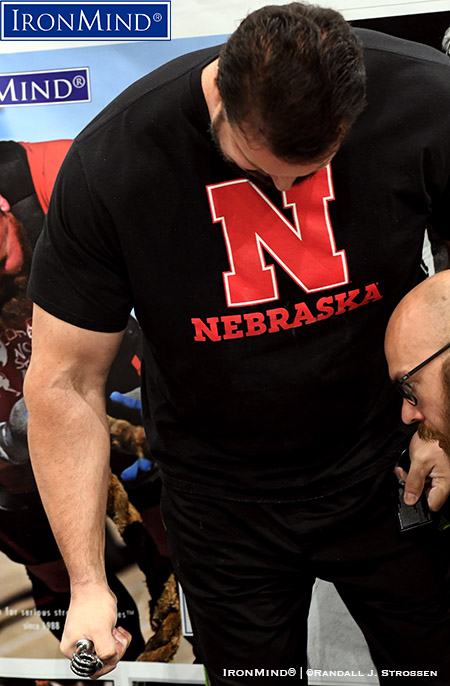