Strasbourg - Even if the numbers weren't huge, the snatch competition in the 85-kg category was spirited and close, setting the stage for the evening. 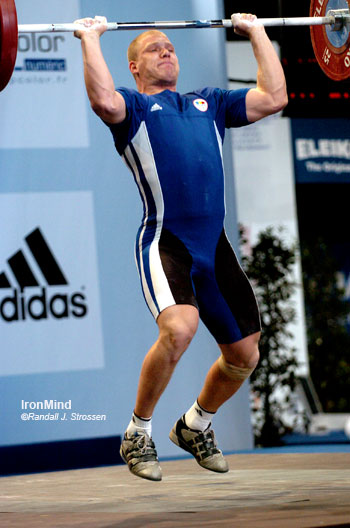 Valeriu Calancea (Romania) flies under 208 kg for the winning clean and jerk and a gold medal in the total as well, in the 85-kg category at the European Weightlifting Championships tonight. IronMind® | Randall J. Strossen, Ph.D. photo.

Izzet Ince (Turkey) opened at 169 kg, the highest first attempt, and he made a good lift. Zaur Takhushev (Russia) missed the same weight on his second attempt, and then Vadzim Straltsov (Belarus) smoked it. Takhushev wanted the lead in the snatch, so he took 170 on his third attempt, but it was no lift. Ince made 171 on his second attempt, and then Straltov moved past him by making 172 on his third attempt. But with one lift left, and being lighter, Ince made the same weight and claimed the gold medal in the snatch.

Talkhushev, who had opened with a good 190, took 196 on his second clean and jerk, going for first in the jerk and third in the total, but he stalled out on the jerk, maybe passing out. He repeated and missed the jerk on his third attempt. The French fans went wild when Benjamin Hennequin came out for 197 kg on his second attempt - a good lift was worth the same positions that Talkhushev had been aiming for, but, quel domage, he missed the jerk.

Next up was Valeriu Calancea (Romania), who had finished third in the snatches, with 165 kg, but he was lighter than either of the two guys ahead of him. Calanea made a no-doubt-about-it lift with 198 for his opener, which put him in the lead in the jerk and in third place for the total. If that lift was good, Straltsov's second attempt, 198, was super easy and super impressive, and it moved him to second place in the jerk and first in the total. Ince wanted those slots, too, so he took the same weight, and made a nice lift.

Back to Hennequin who, along with his teammate David Matam, were by far the most muscular competitors in this category, but this is weightlifting not bodybuilding, so the looks were for naught if you couldn't lift the bar. After his second attempt - which ended in a badly-missed jerk - success seemed unlikely, but Hennequin stuck the jerk . . . he might have been as surprised as anyone else following the action, but the crowd cheered wildly.

Alas, Hennequin's moment in the sun was just that, as Straltsou followed with 201 on his third attempt, which he nailed, giving him the lead in the jerk and the total as rewards for his six-for-six day. Ince wanted those places, too, though (is this sounding familiar?), so he took the same weight and also made a good lift, to claim them.

But remember Calancea? Everyone else was done, he had two attempts left and he wanted those same two places that been getting passed around, so the bar was loaded to 208 kg and Calancea blew it away. At this point, he must have felt like Superman, because the Romanian man of the hour called for a world record 219 kg . . . talk about ending the class with an exclamation point . . . but all he did was deadlift it.

In case you didn't get the sense that this class was close, two of the medals in the snatch and all three in the total were decided on bodyweight: Calanacea, Ince, Straltstov was the final finishing order.