Francis Brebner reported on the Oldmeldrum Highland Games for IronMind®, where a large crowd enjoyed perfect weather and some nice throwing. 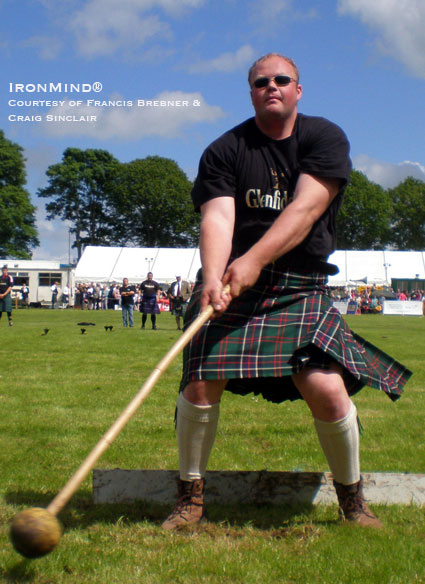 Craig Sinclair on his way to winning the 16-lb. hammer.  IronMind® | Photo courtesy of Francis Brebner and Craig Sinclair.

More than 9,000 spectators flocked to the Oldmeldrum Highland Games yesterday, which is the second Games in the Glenfiddich Grampian Highland Games series.  The weather was perfect for throwing, and after the Games was opened by First Minister of Scotland Alex Salmond, our heavies got under way with the 16-lb. shot.

In the 16-lb. hammer, Craig Sinclair showed great technique and timing and let fly for a winning distance of 129’ 7”, not bad for throwing a little uphill at these Games.  In second was Aitkin at 124’ 6” and in third, Robb at 118’.

The next event was the British Caber Tossing Championships and the caber was 110 lb. and 21’ long, with not much of a taper from what I remember.  The championships ended in a tie between Robb and Aitkin, who both had 12:00 tosses; third was Sinclair with a 12:10.

The final event of the day was the 56' weight over the bar, in which Robb took the win at a height of 15’; second was Aitkin at 14’ and in third was a newcomer to the sport, Stuart Anderson, with 13’.

The next and third Games in the series will be today at Aberdeen City.  A total of twelve Games in all make up the series, which begins in early June and ends in September with the grand finale at the Royal Braemar Games, which is the largest Highland Games in Scotland and is attended by the queen and the royal family.