The Blackford Highland Games in Scotland this past weekend attracted large crowds despite heavy showers throughout the day.  The Games were opened by Chieftain Katharine Brown, the reigning Miss Scotland and Miss UK.  A total of ten heavy athletes did battle with some very impressive distances produced despite the weather conditions.

In the opening event with the 16-lb. shot, England’s David Dowson took the win with a putt of 52’ 4” over Scotland’s Bruce Robb, who surprisingly placed second with a putt of 51’ 6” in his much favoured event.  David Carlin took third place with 45’ 6”.

Moving to the 22-lb. shot and once again showing great form, Dowson had another win to his credit with a very nice putt of 45’ 4”, establishing a personal best in the process.  Robb again had to settle for a second place finish with a putt of 44’ and Carlin took third place with 39’ 6”.

The next event was the 28-lb. Weight for Distance British Championships, in which spectators witnessed a great throwing duel between Robb and Craig Sinclair, with Robb finally winning with a distance of 81’ 5”.  In a very close second place was Sinclair with 79’ 11”; Dowson took third place with 70’ 7”.

In the 22-lb. hammer the winning order stayed the same, with Sinclair throwing a distance of 111’ 11” for his second win in the heavy rain showers; Robb followed in second place with 107’ 1" and Dowson was in third with 97’ 11”.

The caber was 20’ long and 130-lb. and only two athletes managed to toss the beast, with Robb finally taking the win with an 11:55 over Sinclair’s 12:10 for second place.  Peter Hart was in third place with an 87-degree attempt.

The final event of the day was the 56-lb. weight over the bar, won by Robb at a height of 15’ with three athletes tying for second equal at 14’:  Sinclair, Stuart Anderson, and Hart.


The 2010 Blair Atholl Highland Games last weekend were opened by His Grace the Duke of Atholl and the firing of a cannon. 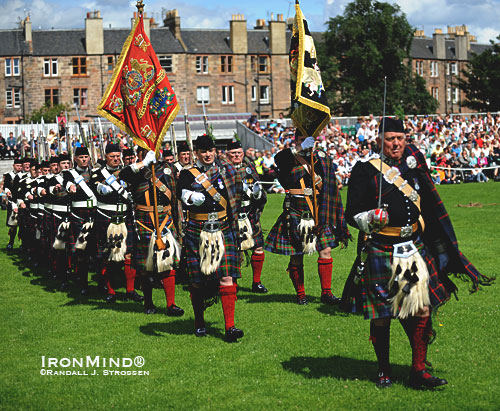 
The Games featured the Atholl Highlanders, the only private army in Europe.  Four of the Highlanders took to the dancing board and performed some traditional Highland dances, including the Argyll broad sword.

It was a dry sunny day and was believed to have a record crowd in attendance, which says a lot about these Games that used to host past events like the Highlander contests, but have since returned to hosting traditional Games and attracting larger crowds.  A total of ten heavy athletes made up the field, with familiar names of Craig Sinclair, Bruce Robb, Sinclair Patience, John McLeod, Neil Elliot, Willie Falconer, Gary Hagen, Stuart Anderson, Pete Hart and England’s David Dowson.

In the first event with the 16-lb. hammer, Scotland’s number-one ranked hammer thrower Craig Sinclair claimed the win with a throw of 135’ 10”.  Bruce Robb landed in second place with a 129’ 9”, which left Robb well happy as this was a personal best for him.  John McLeod placed third with 123’ 4” and David Dowson fourth with 121’ 7”.

In the final event of the competition, the 56-lb. weight over bar, both Robb and Sinclair went at it tooth and nail, with Robb coming out on top at a winning height of  14’ 6”, leaving Sinclair in second place at 14’.  Elliot and Anderson tied at 13’.