Brian Shaw treated yesterday's very strong performance as a warmup and today he lowered the boom at the Gaspari Nutrition All-American Strongman Challenge, winning in a most impressive manner. 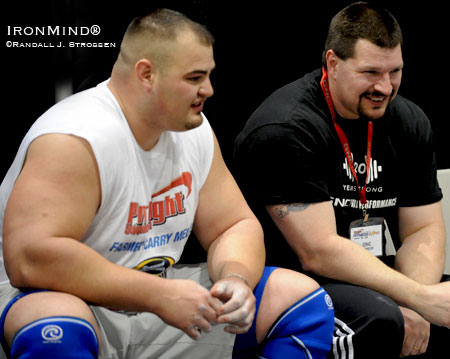 Brian Shaw relaxes after a strong first day at the FitExpo, where he pulled out all stops today and won the contest in a most impressive manner. Is a victory at the Arnold next up for Brian Shaw? IronMind® | Randall J. Strossen photo.


"Brian Shaw's performance was nothing short of spectacular," Odd Haugen told IronMind®, and if that's not enough praise, Haugen added, "I think he can win the Arnold."

Brian jump started his day by winning the Axle deadlift, hitting 385 kg, and then Nick Best won the Super Yoke carry. The final event was the Stones of Strength and even with all the top stone lifters in this contest, only two competitors succeeded in loading all six stones: Brian Shaw (who won the event) and Nick Best.

Here are the final placings:

Unfortunately, Kevin Nee tore his biceps on the deadlift, but he persevered though the yoke, although he could not do the stones.