When you're the IPF super heavyweight world champion, you naturally command a certain respect and when your last name in Gillingham, that boosts your credibility another notch or two. 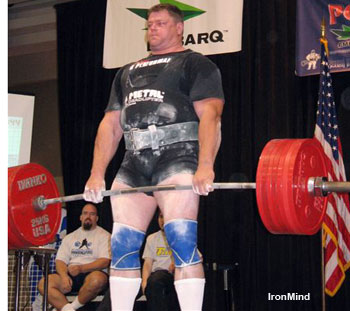 So imagine this, not only do you win the IPF Masters' World Championships, posting a total that gets numero-uno ranking in the IPF Open class so far this year, but then you really drop the bomb: "My strongest days are still ahead," Brad Gillingham told IronMind.

The 40-year-old Gillingham pointed to two key factors in terms of both his phenomenal results this year and the bold prediction he made.

First, Gillingham explained, he has been injury-free this year. Gillingham noted that he had been slowed down by a series of injuries the last couple of years, but not in 2006. "I have had a great year of training," Gillingham said, "and have kept the injury bug away." The second part of the equation, said Gillingham, involves drugs: "If you do it without the drugs, you just keep getting stronger." This has been the key to his long, productive career, Gillingham said, and it is the opposite of the flash-in-the-pan syndrome experienced by people who take a different path.