Letting no moss grow under his feet, Clay Edgin ran the Boss of Mas Wrestling Tournment over the weekend and filed this report with IronMind. 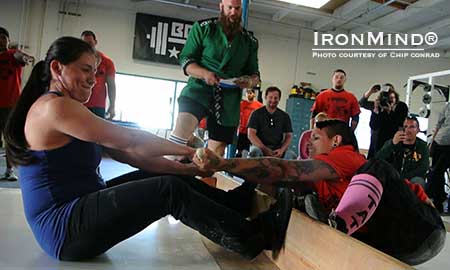 Dan Green's Boss Barbell Club in Mountain View was the site for the Boss of MAS Wrestling Tournament last Saturday. Competitors from many different athletic backgrounds came from all over the state to take part in one of the largest tournaments on American soil to date. Six women and thirteen men, most of whom had competed earlier in the day at the Northern California Strongman Championships, took part in the tournament, which was sanctioned by MAS Wrestling USA and judged by none other than the Vicegrip Viking himself, Odd Haugen. Haugen not only brought his charisma and exuberance to the matches but also two competitors, Romark Weiss and Jacob Finerty, who finished the day winning the title in their respective weight divisions.

The day kicked off with the women's divisions battling it out for the honor of being the Absolute Champion. Newcomer Irma Esquivel bested Sonya del Gallego for the lightweight women's title, which was a repeat of their respective finishes in the strongwoman competition that day.

Prowess in mas wrestling must run in the family because it was Emma Landucci, sister of World's Strongest Man finalist Robert Oberst, who came out on top in the middleweight women's division. Oberst represented the U.S. in the third stage of the World Cup in Dubai last year.

The lone heavyweight women's competitor, Amenah Razeghi, knocked off the rest of the competition one by one on her march to the top of the podium as the Absolute Women's Champion. Razeghi hasn't lost a single round in mas wrestling since the San Jose Fit Expo last June.

On the men's side, Romark Weiss from Newbury Park won an exciting match against personal trainer and strength historian Chip Conrad for the under 175lb championships.

The under 200-lb. class proved once again to be stacked with the most explosive athletes out there. The highlight of this division's melee was the rematch between Joel Snodgrass and Robert Lira. The two met in January at a mas wrestling contest in Santa Cruz where Joel Snodgrass came out on top. Lira was determined to avenge his loss, but fell short in a 1-2 effort against Snodgrass who remains undefeated. This rivalry will continue to brew until their next meeting, which is likely to be at the San Jose Fit Expo World Championships Qualifier in July.

Dave Lippman rolled through a very competitive middleweight division to claw his way to the heap of the mountain. Heavyweight Jacob Finerty, who finished second at the Arnold Classic Mas Wrestling tournament, was the only one representing the big boys and competed against the middleweights during his campaign to become the Absolute Men's Champion.

A very special thanks to IronMind for continuing to support MAS Wrestling USA and providing some Captains of Crush grippers for the winners of each division!