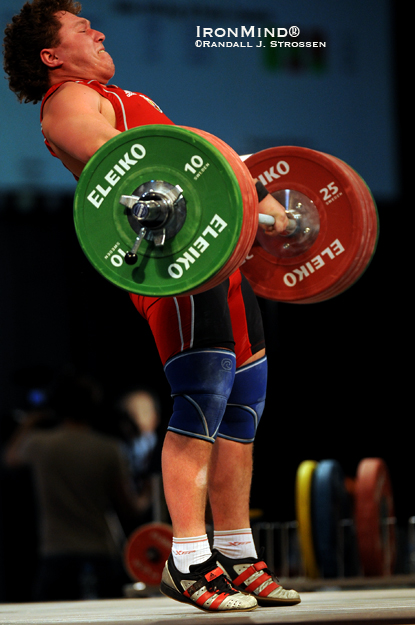 Andrei Aramnau cranks on his opening snatch, 195 kg, on his way to all three gold medals in the 105-kg class at the 2010 European Weightlifting Championships.  IronMind® | Randall J. Strossen photo.


Starting the snatch after everyone else was done. Aramnau won the gold medal on his attempt, an easy 195-kg lift.  That done, Aramnau moved up to a world record attempt with 201 kg, but he missed it behind on his second attempt and in front on his third attempt.

After making three silky smooth snatches, Russia’s Vladimir Smorchkov ran into trouble in the clean and jerk, twice missing the jerk with 215 kg before making a very solid success with the same weight on his third attempt.  His teammate, Dmitriy Klokov fared better, making 217 kg on his first attempt, and then 224 kg on his second attempt, but he did not come out for his third attempt—reportedly due to a shoulder injury.  Aramnou made 220 kg and then 225 kg.  Oleksiy Torokhtiy (Ukraine), in a bid to move into gold medal position in the jerk, called for 225, but he only deadlifted the weight.

Having all three gold medals in hand, Aramnau passed on his third attempt.