The big news at IronMind® is that Randall Strossen's Olympic Identity and Accreditation Card arrived today - Beijing is the fourth Olympics for which IronMind®'s flagship publication MILO® has been credentialed to cover weightlifting . . . MILO® is the only U.S.-based iron game publication to receive press credentials for any of these Olympic Games, and IronMind® is very honored by this distinction. 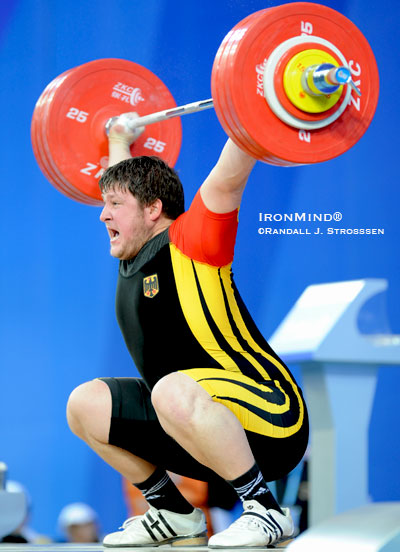 Matthias Steiner (Germany) caught IronMind®'s eye at the Olympic test event in January when he snatched this 193 kg, and cleaned and jerked 230 kg. Two and a half months later, at the European Weightlifting Championships, Steiner did 200/246, at which point IronMind®'s Strossen began saying Steiner was the guy to watch in the supers at the upcoming Olympics. This past weekend, going six for six, Matthias Steiner finished with 201/250, and all we can say now is, "Go Matthias!" IronMind® | Randall J. Strossen photo.


As in Athens, watch for daily reports on weightlifting from Beijing in the IronMind® News column, along with Randall Strossen's photos, as well as for complete coverage in MILO® following the Olympics.

In the meantime, start counting the days until the Opening Ceremony on August 8 and begin thinking about who is going to lift what . . . In January, Randall Strossen covered the "Good Luck Beijing" test event for weightlifting and came back singing the praises of the venue and everyone's hard work to make this event as spectacular as it will be. If you missed this or just want to re-stoke the fires, here you go:

Steiner is the Big Story in the Supers

Welcome to the Olympics!

See you in Beijing!