Paris–With a cash bonus offered by Hossein Rezazadeh if he could break Rezazadeh’s world record in the snatch, Behdad Salimi (Iran) had added incentive as he ripped into the 214-kg challenge; and in less than one second, he had it overhead as he was well on his way to winning the superheavyweight title at the World Weightlifting Championships. 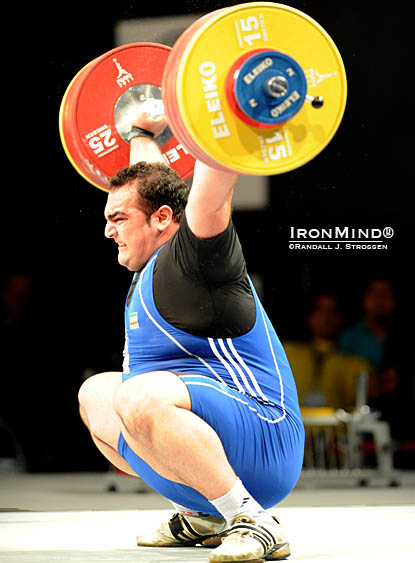 Behdad Salimi had recently snatched 217 kg in a small contest, so everyone knew the horsepower and the technique were there to break Hossein Rezazadeh’s longstanding world record in the snatch.  Salimi showed that his unofficial performances were no fluke as he sank the putt on this 214-kg snatch at the World Weightlifting Championshps, good for a new world record.  IronMind® | Randall J. Strossen photo.


Along with expectations of big things from Salimi, weightlifting cognoscenti were awaiting the the man mountain Chingiz Mogushkov (Russia), who weighed in at 184.44 kg, and while coming in as the Russian national champion, he was little known around the world.

Mogushkov had a rough time in the snatch, missing 192 kg twice before making it, and he only fared somewhat better in the clean and jerk: he missed 233 kg, made it, and then ended his evening with a successful 240-kg effort.
Salimi has been built up as the heavy favorite in the +105 kg category as the London Olympics draw near, but his clean and jerk have lagged behind his snatch, the jerk in particular, so how he did once the bar hit the region of 250 kg was going to be telling.

Opening with a conservative 241 kg, he made a good lift and when he called for 250 kg on his second attempt, it was time to see whether or not he could polish off the lift.  He did, and in a bid to break the world record in the total, he called for 260 kg on his third attempt, but only pulled it.