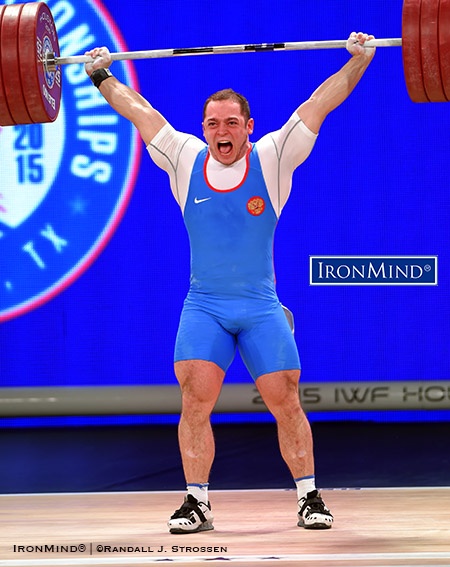 The Chinese Weightlifting Association might be saying deja vu . . . again as Tian Tao won the snatch, only to bomb out in the clean and jerk—just as his teammate Lu Xiaojun had done the night before in the men’s 77-kg class. Tian Tao was the third lifter on the Chinese men’s team who failed to post a total, which has cost the team valuable Olympic qualification points.

Okulov, on the other hand, was consistently good: he went six-for-six, with a silver medal performance in the snatch (176 kg), and gold medal performances in the clean and jerk (215) and the total (391).

Rostami took 218 kg on his second attempt and a successful lift would give him the gold medals in the both the jerk and the total—he appeared to have made the lift, but then lost control of the bar at the last minute and it crashed down.   Showing his confidence, Rostami moved up one kilo on his third attempt—with a world record in the clean and jerk added to the rewards if he could make a good lift, but the wheels came off the car early when the Iranian lifter was red lighted for an elbow touch.