The Brawl For It All graced the Tahoe Biltmore on the shores of Lake Tahoe as big-name armwrestlers battled for top honors and invitations to compete at the 2007 Arnold. 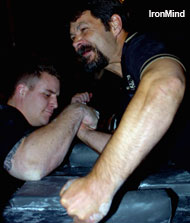 Tom Nelson (left) pins Herman McCoy at the Brawl For It All at the Tahoe Biltmore last night. There are no losers here, though, as both of these shy guys are going to the 2007 Arnold. IronMind® | Randall J. Strossen, Ph.D. photo.

Here are the men's side, pro right hand top three (all qualified for the 2007 Arnold):

In addition, because they weighed in at under the 176-pound limit, John Parton and Allen Fisher also qualified for the 2007 Arnold.

On the women's side, here are the top three at 143 pounds (all qualified for the Arnold):

Hats off to Denise Wattles, Leonard Harkless and the Tahoe Biltmore for staging another great armwrestling contest at Lake Tahoe.