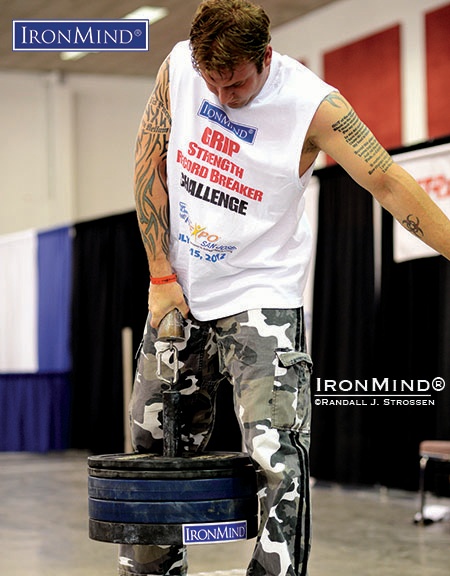 Adam Glass is certified on the Captains of Crush No. 3 gripper, the IronMind Red Nail and is a former world record holder on the Little Big Horn (shown). This weekend—while competing at the Armlifting USA event at the Mr. Olympia—Glass will be seeking to add another notch in his belt as he attacks a double bodyweight double overhand deadlift on the Apollon’s Axle, a staple of the grip strength world. IronMind® | ©˙Randall J. Strossen photo

Armlifting USA is making its Mr. Olympia debut this weekend and all eyes will be on Adam Glass (CoC3 '10, Red Nail '08) as he attacks a double-bodyweight Apollon’s Axle double overhand deadlift—that’s a lot of words, but to grip strength aficionados this is simple: Glass’s goal is world class.

For the first time in history, Armlifting USA will be featured at the Mr. Olympia EXPO in Las Vegas. Headlining the 18 person field is Adam Glass of Saginaw, Texas.  Glass is seeking a double bodyweight Apollon's Axle Double Overhand Deadlift at this contest.  The list of people from North America that have accomplished this feat in a contest and weigh over 200 lb. is very short: Eric Roussin, Andrew Durniat, and Adam Glass.

Up and coming Armlifters Steve Millard and Stephen Anderson will also certainly be in the mix for podium finishes in their respective weight classes.  Sardana Osipova brings an international flair to the contest, representing Russia.

The competition begins on stage on Saturday September 14th in the Las Vegas Convention Center at 10 am.