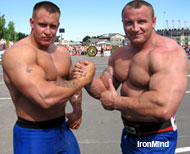 Bryce reminded strongman fans that on the basis of his performance in Belarus, Arild Haugen received an invitation to next week's WSMSS Moscow Grand Prix, so "he can maybe qualify for the Worlds. Moscow is a big chance for him in just his second international outing at the age of 20."

Incidentally, ace MILO® strongman reporter Lene Karlsen, who first broke the story on the young phenom when he made a huge splash at this year's Norway's Strongest Man contest, pointed out that "Arild Haugen is NOT Odd's son!" just so everyone can keep their favorite Viking family relationships clear.