The beginning point for all of this is Louis Uni's Apollon Railway Car Wheels, usually referred to as Apollon's Wheels, a challenge lift from the past, and with so much discussion about who has the record on modern-day descendants of this feat of strength, it's time to set the record straight. 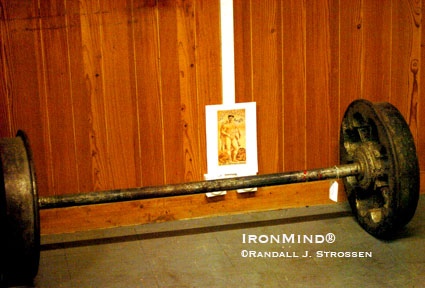 
In fact, Paul Ohl took on this challenge, with the following statement, which he sent to IronMind® to help foster further comment:

The Apollon Axle is an important piece in the history of the sport of strongman. And it needs to be treated as such. The original Axle was a set of railway car wheels connected by an axle. Louis Uni (Apollon), a French professional strongman, procured himself that implement circa 1892 and considered it as a ready-made barbell. Axle and wheels weighted 366 lbs (166 kg). Maximum diameter of the wheels was 26 inches. Axle bar was 1.93 inch (49 mm ) thick.

There is absolutely no evidence that Louis Uni ever cleaned, even less jerked or pressed that Axle himself.

The only lifts officially recorded on the original Axle came from a French [lifter] (Charles Rigoulot ), in Paris, on March 3, 1930, and two Americans (John Davis, September 13, 1949, Paris, and Norbert Schemansky, October 1954, Lille, France). Schemansky becoming the first ever to jerk the Axle three consecutive times. All three men were at one time or another World Weightlifting champions and weighted less than 240 lb.

Given the historical significance of the Apollon Axle, a record can only be so considered official if done on an exact replica of the original Axle.

At Fortissimus, we have introduced the IronMind® Axle as part of the Overhead World Challenge and will consider a record if done on the official IronMind® bar with steel wheels on each side, the wheels measuring exactly 26 inches in diameter. However we will name the event accordingly: IRONMIND® AXLE LIFT. For the time being we consider that the standing WR at the Apollon Axle is held by Zydrunas Savickas (2007) at 440 lbs (200 kg). If that record is to be challenged it must be on a similar equipment.

At IronMind®, we agree with much, but not all, of what Paul Ohl has written—and this is a situation when the details, we think, make all the difference.

Typically, whether they give him credit or not, people addressing the subject call on what David P. Willoughby wrote about Apollon's Wheels in his classic book The Super Athletes, and Paul Ohl's statement follows in this tradition.

I never gave some of the details much thought until Craig Holle and his brothers pointed out that based on their calculations, the standard measurements everyone repeats for these most famous wheels did not compute. I was so intrigued by the Holles's analysis that Elizabeth Hammond and I arranged to see the actual object in question, the original Apollon's Wheels, in the flesh, with the objective of seeing who was right: the Holle brothers with their calculations or the oft-repeated numbers about 26-inch wheels, for example. And as one of the very few people in the world who has seen, touched and measured the actual Apollon's Wheels, I can attest that not all of the most commonly repeated dimensions are accurate . . . the Holles were right.

Incidentally, on numerous occasions, the Apollon's Wheels used at the Arnold are described with such phrases as "an exact replica," and then direct comparisons are made between the performance of that strongman contest's competitors and the historic performances on the actual set of wheels. Of course, even the most cursory comparison of what is used at the Arnold and the now-often-scanned photo of John Davis with the real deal overhead will show that they are about as similar in size and appearance as my upper arm and Bill Kazmaier's. Presumably, these comments about being "an exact replica" reflect Terry Todd in his role as the promoter, not Terry Todd as the student of iron game history, and these misstatements aside, I would find it hard to imagine Dr. Todd not being the first to agree that one is not a cookie cutter of the other.

Without getting sidetracked about whether or not Uni himself lifted them, let's focus on the key features that make the Apollon Wheels so hard to hoist: 1) the nearly 2-inch diameter of the bar 2) its smooth surface and 3) the fact that the weights (wheels) did not revolve.

It should also be noted that among both lifters and authorities in the field, the oversize diameter of the bar has frequently been cited as the biggest challenge for most people. That this is the case is reinforced by the fact that cleaning the weight has generally been regarded as much harder than jerking it. Notably, even though weighing under 180 pounds, Tommy Kono jerked the actual Apollon Wheels when they were placed on his shoulders (done because Tommy said he knew he couldn't clean the Apollon Wheels, but he thought he could jerk them).

After the Apollon Wheels were dropped and the bar bent, that added another level of complexity, but the real point is that to originally qualify as making the lift, the Apollon Wheels had to be cleaned and then jerked. Cleaned - as opposed to shouldered in the continental style - is the critical element here, and since there was no rule against using a switch grip, Davis's grip was nothing more than a thinking man's way to make up for having small hands. It should also be understood that many modern-day cleans would not pass muster in the days when the actual Apollon Wheels were being attempted . . . the bar touching the body on its way up to the shoulders was cause for disqualification back then.

Incidentally, although Charles Rigoulot was an Olympic champion and a world record holder, he was never a world champion in weightlifting - at least not as far as either the International Weightlifting Federation or I know. This is not central to this story, but it's another example of how what has been presented as fact is not.

In 1994, IronMind® developed a straightforward way to recreate the basic challenge posed by the Apollon Wheels, while also providing all the benefits of thick bar training. IronMind® specifically chose the name Apollon's Axle™ because while we certainly understood we were not replicating the Apollon Wheels, we just as certainly understood our historic link to that piece of equipment as we consciously replicated the most vital of the features that made the Apollon's Wheels such a challenge to lift.

And in the earliest days of people copying the name IronMind® had coined, we defended the mark quite vigorously, but as time went on and as this piece of equipment proved its popularity from Latvia to Los Angeles, IronMind® chose to sit back and enjoy the fact that what had begun as a proprietary (even if descriptive) product name had gained such a widespread following that it had become a generic: Kleenex, here we come.

For years, IronMind® advertised with certainty that our Apollon's Axle™ was used in more strongman contests than all others combined, and while we no longer track this statistic, the fact remains that this bar - by any name - captures the essential qualities of what is an historic challenge of enduring interest.

Earlier, we had explained that the IFSA bar, introduced in 2007, is 1-3/8 inches in diameter and it is knurled. So, coming full circle on this, we find it more than curious that an apparatus (IFSA's) with such divergence from the original challenge object (Apollon's Wheels), and with such a faint track record, is put forth as the standard on this challenge. This seems inconsistent with Fortissimus's stated philosophy of being both familiar with and respectful of strongman history.

In the end, this is really very simple and straightforward: there is only one original set of Apollon's Wheels and while the set of wheels used at the Arnold differs in very significant ways from the original, the IFSA set has even less in common with the genuine article, and its already low comparative value is further eroded by its nearly non-existent history of use.

On the other hand, the Apollon's Axle™—created by IronMind® many years before either of these other pieces of apparatus saw the light of day—faithfully presents the smooth bar of such mighty dimensions that help make lifting the actual Apollon Wheels such a challenge. Lock on some weight and you're good to go, which is exactly why it fully merits the name it was christened with, Apollon's Axle™. And beyond the irrefutable fact that world records done on this bar are the world records for this lift, we also feel that they are very worthy descendants of the lift performed on the actual Apollon Wheels.