Coming into the final stage of the 2009 Strongman Champions League contest, Andrus Murumets had an unassailable lead, so even with his mid-field finish in Kiev on Saturday, he was crowned the overall champion for this season. 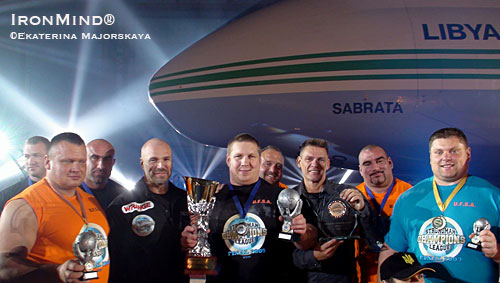 
Zydrunas Wins His 3rd SCL in a Row . . . Andrus Murumets is the Overall Winner of SCL 2009
By Marcel Mostert

The final SCL 2009 in the Ukraine had a great venue in Kiev.  It was in  the factory, built in 1952, where they manufacture the biggest freight airplanes of the world, the Antonov.

One of these aircrafts was the décor of the show, incredibly huge and massively big are these airplanes.  It did fit perfectly for the SCL show with the strongest men of the world.

In total, 41 athletes competed in the Strongman Champions League this year.  Andrus Murumets won the overall title over 8 stages, Agris Kazelniks got 2nd and Zydrunas Savickas got 3rd place.

All athletes, crew and officials of the SCL 2009 had a great and nice celebration in Kiev until late, late hours, and we look forward to 2010 where we will have 10 stages of SCL again!