Andrus Murumets continues to turn in impressive performances on the professional strongman circuit and this weekend he won the Oulu Grand Prix in Finland, underlining his stature as a contender for one of the top positions at the upcoming IFSA World Championships. 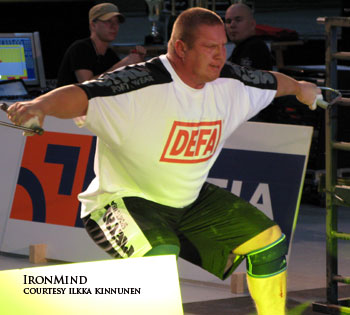 Andrus Murumets on the Hercules Hold at the Oulu Grand Prix. Murumets, a former world record-holder on the Rolling Thunder®, is having a huge year in strongman and is seen as a favorite at the upcoming IFSA world championships. IronMind® | Photo courtesy of Ilkka Kinnunen.

"This competition was the main event of the Oulu City Festival," promoter Ilkka Kinnunen had explained to IronMind® and, "the competition got excellent media coverage nationwide and especially in Oulu media. It will also be seen on National TV channel MTV3 22.9. and after that on Eurosport."

Looking ahead, Kinnunen said, "The organizer, Fitness Media Ltd., has already started negotiations for next year's competition and the plan is to make it even bigger than this year, with more athletes and lasting the full weekend [rather than one day]." Kinnunen said there are also plans to add a professional powerlifting event next year.

"Andrus Murumets, Jani Illikainen, Robert Schepanski, and Vidas Blekaitis showed that they are ready for the [IFSA] World's, taking all top four places," said Kinnunen. Kinnunen also praised "a new athlete from Czech Republic, Zdenek Sedmik, who is called 'Giant,' who totals 1040 kg in powerlifting, stands 196 cm tall and weighs 160 kg," Kinnunen said. "For sure we will hear [more] from him in a future . . . This was his first international competition."

Here are the final places and points: