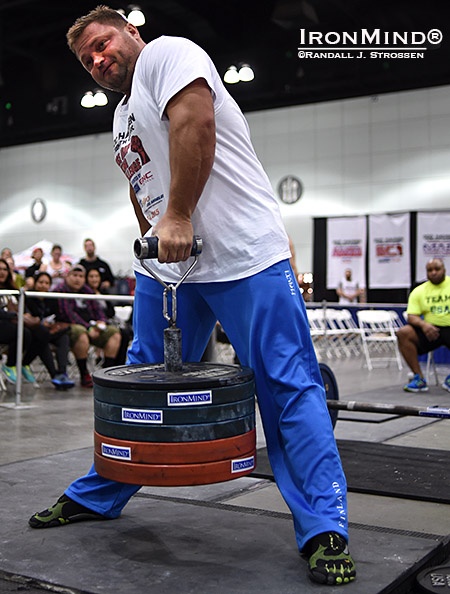 Tyukalov is the current world record holder on the Rolling Thunder, a staple in top drawer grip competitions, and he handled the 118 kg needed for the win with every indication of having much more in the tank—taking no more attempts when the Odd Haugen, the only other competitor not eliminated by that point, missed the weight.

It was the same pattern on the Apollon’s Axle double overhand deadlift—Haugen missed 220 kg, Tyukalov made it easily and took no more attempts.

Last up was the Viking Fishing Pole, which involves raising a heavy “fishing pole” by winding it up using an IronMind wrist roller set up on Vulcan Racks—this is known as a punishing event and once again Tyukalov decimated the field.

If Alexey Tyukalov is sounding like Russia’s version of Mike Burke, get this: after the competition (with no additional warmup :-), Tyukalov asked if he could try certifying on the Captains of Crush  No. 3.5 gripper, and while he was close it was no cigar, his referee, Mike Corlett, was fully confident had Tykulov not just done the Viking Fishing Pole, he’d have succeeded.