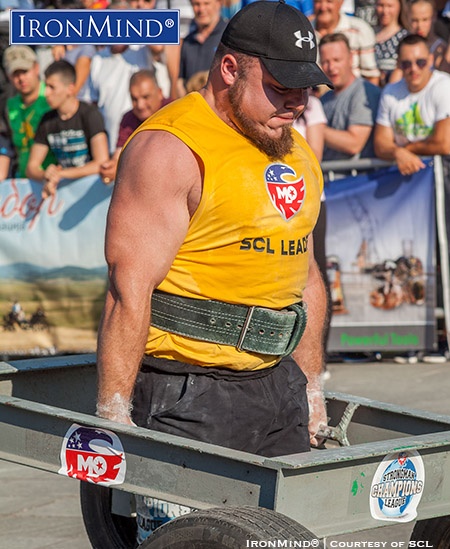 Matjaz Belsak (Slovenia) is the overall leader of MLO Strongman Champions League at this point in the 2016 tour. IronMind® | Image courtesy of SCL

Setting the stage for IronMind, SCL director Marcel Mostert said, “In a very sunny 30 degrees [86 F] atmosphere, deep in the mountains of Serbia, the SCL train stopped in Zlatibor last weekend for stage 6 of the Strongman Champions League (SCL).

“The crowd was really great there, enthusiastic until the very end, and the Latvian strongman Aivars Smaukstellis took the title—proving again again that he is very strong, as he just finished in the deadlift 350 kg for reps, with 8 reps, which was just 2 less than Martin (aka The Deadlift Kid) Wildauer,” said Mostert.

“Speaking of Martin Wildauer, he got second place overall, and Matjaz Belsak took the third place, overall.
“The Icelander Stefan Solvi Petursson showed his power by winning the Framewalk, 340 kg over 40 meters in 20.67 seconds, and took fourth overall.

“Besides this great show and strong performance from all the athletes, the Strongman Champions League also launched its new sponsor, MLO Nutrition.

“MLO Nutrition is a supplement company that has combined the best from all sports in different lines. “MLO International LLC has decades of experience in the field of health and sports nutrition and modes of training and competition preparation in the areas of fitness, bodybuilding, powerlifting, strongmen, competitive weightlifting and athletics. Therefore SCL will be named as the MLO Strongman Champions League, and we hope it will be a long and good marriage with our new head sponsor!

"Next stage nr 7:  SCL BULGARIA and this will gone happen in Plovdiv at 23/24 July, so stay tuned here on IronMind for the results, or watch us live at www.strongmanworldserieslive.com," Mostert said.