Lignano Sabbiadoro, Italy - It wasn't a pretty scene, with two of the medal favorites - Taner Sagir (Turkey) and Ivan Stoitsov (Bulgaria) - bombing in the snatch, but Oleg Perepechenov (Russia), Ara Khachatryan (Armenia) and Aleksey Yurkin (Russia) kept their eyes on the ball and took home all the medals in the 77-kg category at the European Weightlifting Championships. 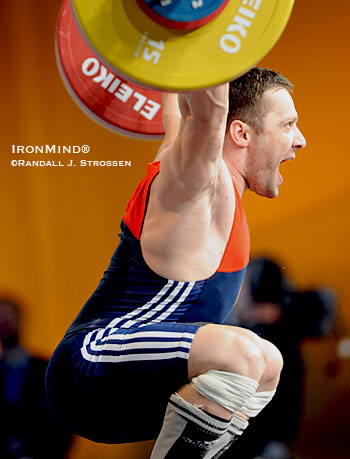 On this way back up with his 164-kg third attempt snatch, Oleg Perepechenkov (Russia) stayed focused and won the top honors in the 77-kg class at the European Weightlifting Championships. IronMind® | Randall J. Strossen photo.

Ivan Stoitsov (Bulgaria), a muscular and somewhat forbidding-looking lifter, was expected to challenge for a top position, but after missing 155, 155 and then 158 kg in the snatch, he was out. 2004 Olympic gold medalist Taner Sagir opened with 160 and he had it overhead, but stepped off the platform before he had it under control. His confidence did not seem to be shaken by this miss, as he moved to 162 on his second attempt, but it was basically a repeat of his opener except that in his desperate bid to save the lift, Sagir chased the bar forward with such speed that by the time he was off the platform and dumped the bar, it hit the edge of the safety rail - certainly getting the attention of the referees seated just feet away from the crashing barbell, which was barely kept from being deposited at their feet or worse. Sagir's third attempt lacked the outward drama of this first two lifts, but the final impact was even more significant: Sagir never got under the bar, and had just bombed out.

In contrast, Oleg Perepechenov reeled off three good snatches - 158, 161, 165 - performing like a hard rubber ball, bouncing up and down with the barbell. Ara Khachatryan, who had opened with a good lift with 160 kg, and then missed 165 kg, got the gold medal in the snatch with an easy success with 165 kg on his third attempt.

Aleksey Yufkin (Russia) is similar to Taner Sagir in having a physique and boyish appearance that are surprising for the weights he lifts, but being here is about what you lift, not what you look like and lifting is something Yufin does very well. Making up ground after only having only one good snatch, Yurkin banged out three solid clean and jerks - 190, 196 and 200 - and the last lift got him the gold medal in the clean and jerk.

His teammate, Perepechenov, made 193 and then 198 kg, before missing the jerk on 201, all done with quick, almost no-set, jerks. Khachatryan power jerked his opener, 191 kg, and went into a full squat jerk with 196 on his second attempt, using a very fast recovery on the jerk. Trying to save the jerk on his third attempt (198 kg), Khachatryan was twisting clockwise, in a full squat with the bar overhead - it was a valiant effort, but he never gained control of the lift.

Despite the bombouts here, this class looks as if it will produce fireworks in Beijing - keep your eye on Aleksey Yufkin, along with the guys already on everyone's short list for the Olympic podium.