Tel Aviv—Missed lifts, technical problems, a misload, language barriers, intra-team battles—the 77-kg class at the European Weightlifting Championships had it all and the last man standing was revealed on the final attempt: Erkand Qerimaj (Albania) jerked 194 kg to beat his teammate, Daniel Godelli, on bodyweight for the gold medal in the total. 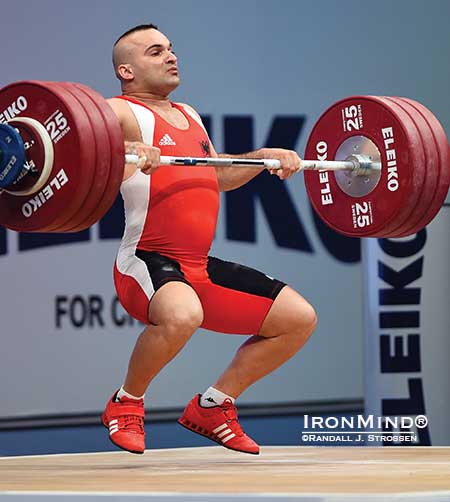 Erkand Qerimaj (Albania) flies under 194 kg in the clean and jerk, adding a gold medal in the total to the one he'd already harvested in the clean and jerk in the 77-kg class at the European Weightlifting Championships in Tel Aviv.  IronMind® | Randall J. Strossen photo


Want an example of what took place, along with the actual lifting?  Razmik Unanian (Russia) missed his opening clean and jerk (186 kg), getting three red lights when the jerk crashed down.

Since Unanian uses a splot jerk that is about as pretty to watch as the name suggests, why give it a second thought when he glared at the barbell?  But he kept glaring at it.    And when he finally walked off the platform, Unanian remained standing on the stage looking as if he were ready to take on everyone in the hall if necessary, starting with, it seemed, the referees.    Meanwhile, the stands (while they might not have had a single actual spectator, they did have lifters, coaches, and others who could see and understand what was going on) erupted into a chorus of whistles and boos, which got louder and louder.

After what seemed like forever, a loader ran up on the platform, went to the left side of the barbell and, with evident embarrassment, removed a 2.5 kg plate that should not have been there.

So, Unanian got another crack at his opener and he made a good lift.

This was just one of the colorful asides, so if anyone thought you could sleep on the jury, think again.

In contrast to the 69s, which had nary a miss, the 77s looked like the the field had been mined—how about one good lift for each of the snatch medalists, with Tigran Martirosyan winning the gold medal after missing his opener at 155 kg, jumping to 157 kg for a good lift and then missing 160 on his third attempt.  Godelli also made 157 on his second attempt, also for his one good snatch, but he was heavier than Martirosyan and got bumped down to the silver medal.

Despite the wind and waves along the way, this class ended with a classic storyline: having won the gold medal in clean and jerk on his second attempt, Qerimaj used the last attempt of the class to go up 1 kg to 194.  If successful, he would wrest the gold medal in the total from his teammate, which he did, and in perfect keeping with the character of this competition, he did so on bodyweight.