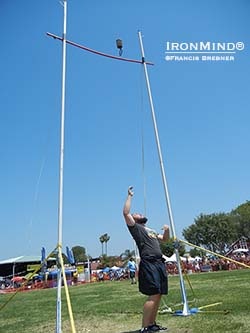 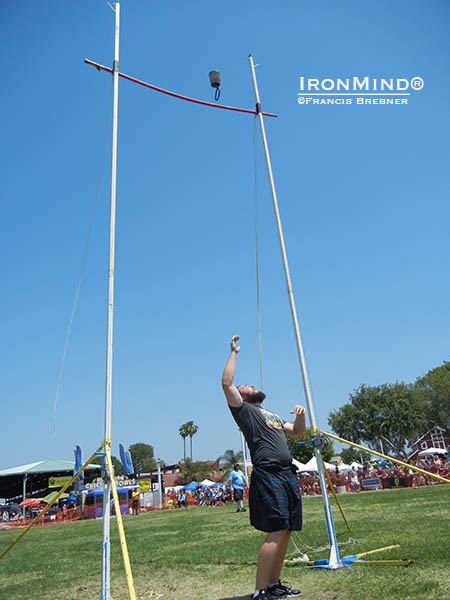 Julian Wruck coming close to making 22 feet in the 42-lb. weight for height—it was the Highland Games Heavy Events debut for the Austrialian discus thrower, who is a student at UCLA.  IronMind® | Francis Brebner photo

The Costa Mesa Highland Games this past weekend drew more than 30,000 spectators over two days of heavy events competition, and they witnessed some of the best stone putting in the sport of Highland games in the last decade.

A total of 108 athletes made up the field in several categories, including professional, amateur A, B, and C groups, masters, women and novice.  The pro division had a hefty lineup athletes: Matt Vincent, Dan Williams, Rusty Price, Jake Sullivan, Nick Kahanic, Jon O’Neil, and Ryan Stewart.

The 56-lb. weight-over-bar was riveting as Vincent and O’Neil duked it out, tying at 17’ with the win going to Vincent on countback with fewer attempts.  Third was Sullivan at 16’.

The 20-lb. sheaf-over-bar was a slug fest with O’Neil, Vincent, and Stewart all clearing the height of 30’.  The bar was then moved to 32’ and all three fell short, with the win awarded to O’Neil on countback with few misses; Stewart was second and Vincent third.

The caber was 130 lb. and 18’ 6”, perfect proportions as only the best three in the group were able to toss this mighty stick and no perfect 12 o’clock was given.  The event was finally won by Vincent with a toss of 12:05; in second place was Sullivan with 10:50 and in third Williams with 10:30.

Next up on the Southern California circuit will be the San Diego Highland Games in June.