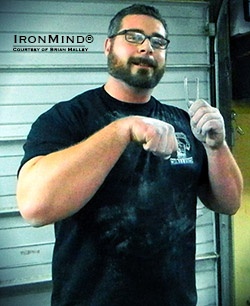 Longtime grip strength guy Frank Pizzo has just been certified on the IronMind Red Nail, proving himself as a steel bender. 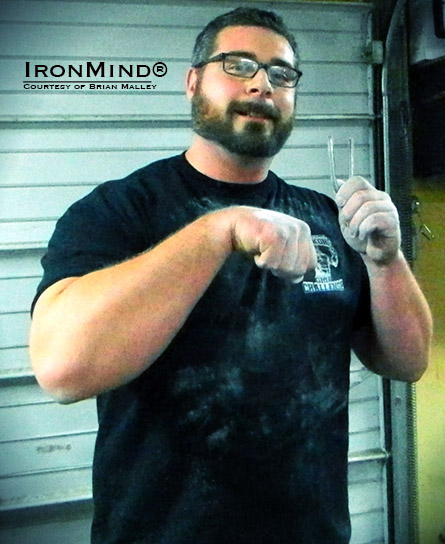 Frank Pizzo has added another asset to this grip strength portfolio: He’s just been certified on the IronMind Red Nail, proving himself as a steel bender. Pizzo is 31 years old, is 5’ 11’ tall and weighs 247 lb.  IronMind® | Photo by Charity Pizzo

http://www.ironmind-forum.com“Grip has been a longstanding passion of mine for over a decade,” Pizzo told IronMind. “It began simply with the Captains of Crush No. 1 gripper back in 2004 and from there moved forward into all of the various dimensions of grip strength.

“I began competing in NAGS-sanctioned grip contests early last year, and wanting to be proficient in all facets of grip, I began short steel bending.  I immediately fell in love with it, and decided to actively pursue the Red Nail.  Fast forward a year, and I was able to parlay my 14 years of weight training experience and 10 years of grip into a successful Red Nail attempt.

“Other notable achievements in the world of grip include:

“I would  like to thank my referee, Dr. Brian Malley, who did everything in his power to ensure my attempt went smoothly!  And I would also like to thank my beautiful wife Charity who has supported all of my ‘weird grip stuff’ through the years,” Pizzo said.

IronMind would like to echo Frank Pizzo’s thanks to Dr. Brian Malley, and to Frank we say, Congratulations—your name has just been added to the Red Nail Roster.