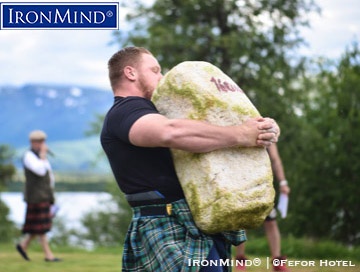 Nathan Goltry (USA) might have come into the 2018 IHGF Stones of Strength World Challenge in Fefor, Norway as a dark horse, but he left as the champion. IronMind® | ©Fefor Hotel photo

The IHGF returned to the Fefor Hotel and its spectacular setting for the 2018 edition of the Stones of Strength World Challenge.

In the 230-lb. stone press, athletes had 75 sec. to complete as many reps as possible from the ground to overhead. Burke and Solvang tied for an early lead with 2 reps, but this was short-lived as Reynolds surpassed them with 3 reps. Goltry, the dark horse, knocked out 4 smooth reps to claim the first win of the competition.

Athletes then picked up and carried the Fefor stone, weighing a massive 160 kg, over and back a course of 20 m for max distance. Solvang took the early lead with 65’ 6”, which was marginally surpassed by Vilhjalmsson at 72’ 1”. Romero took off at a brisk pace and set a new leading distance of 131’ 2”. Burke upped the ante with a lung-busting 133’ 5”. Goltry took off like a sprinter to notch his second victory at 143’ 2” for a new competition record.

The 50-lb. stone throw was done from behind a trig with an approach of 3 m and thrown freestyle with one or both hands. The lead changed hands several times in a see-saw battle. Third place was close between Romero at 20’ 9” and Burke, who settled for fourth at 20’ 8”.  Goltry pulled off second place with 21’ 7”, with Longhurst nailing first at 22’ 6”, a new ground competition record.

In the stone medley, speed and agility came into play as the athletes lifted and carried a series of natural stones, weighing 175, 200, 220, 235 and 255 lb., over a course of 10 m. Longhurst, a strong favorite, fell short of completing the course, dropping the fifth stone a few meters before the line and running out of time; he recorded 4 stones and 4.60 m with the fifth stone, good enough for fourth place.

Only three athletes finished the course with all 5 stones, with Reynolds clocking 114 sec. for third; Burke doing 102 sec. for second; and Goltry finishing in 58 sec. for first.

The final event was the Atlas Stones, ranging from 220 to 400 lb., and the athletes had 75 sec. to place all five stones onto barrels in the fastest time. The title was within the grasp of Goltry, so long as he made no mistakes, with 6.5 points separating him at 39 points and second-place Burke at 32.5 points. Reynolds and Longhurst were in joint third on 26.

Only three athletes lifted all five stones. Burke managed four stones and nearly had the fifth stone loaded but strained his hamstring, leaving him in fourth place. Solvang set a very good time of 26.40 sec. for third place. Goltry had a superb time of 21 sec., and all eyes were now on Longhurst, who was in the zone, finishing in 19.50 sec. to claim the win and setting a new ground competition record.

Overall winner Goltry, who was competing via an IHGF stones qualifier, stands 6’ at a solid 315-lb. and looks made for stonelifting, had spent months in preparation for this competition and was hungry for the title: “This is the first time that I have been out of the country, and competing here at the Fefor Hotel in Norway has been a blast. It’s been unbelievable and the best trip I have ever been on—I look forward to next year and defending my title.”

In the 88-lb. overhead stone press, athletes had 75 sec. to complete as many reps as possible from the ground to overhead. In a close competition, Ingalls and Geamanu tied at 11 reps, with Bradley doing 10.

Athletes had to lift and carry a series of natural stones weighing 130, 155, 175, and 200 lb. over a 10-m course in the stone medley. Four athletes completed the course with all four stones. Aceto took the early lead at 56.80 sec. and was nipped by Geamanu at 54 sec. Bradley bettered that time with 47.90 sec., and Ingalls, having the advantage of going last, turned up the gas and produced a winning time of 41.45 sec.

Next, athletes picked up and carried the Fefor stone, weighing 255 lb., up and down a course of 20 m for max distance. Aceto was first to break the 30-m (98’) barrier. Geamanu upped the leading distance to 114’ but was then crushed by Bradley at 166’ 9”. Ingalls put up a gutsy performance chasing Bradley and produced 147’ 3”, good for second place.

In the final event, the Atlas stones, four athletes completed all 5 stones within the 60-sec. time limit. Harjapaa led the way with a time of 45 sec., which was topped by Aceto at 27.53 sec. Bradley surpassed that at 20.50 sec., and Ingalls, who set off like a sprinter, won the event—and the competition—in a time of 17.16 sec.

The IHGF would like to thank Anne Grethe Horten of the Fefor Hotel for hosting another superb IHGF Amateur Highland Games World Championships and IHGF Stones of Strength World Challenge and for all her support given to building the future of the sport and its athletes. 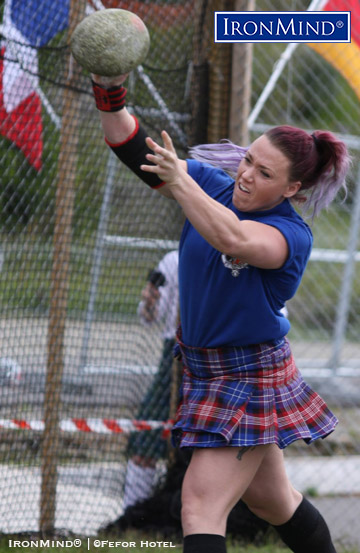