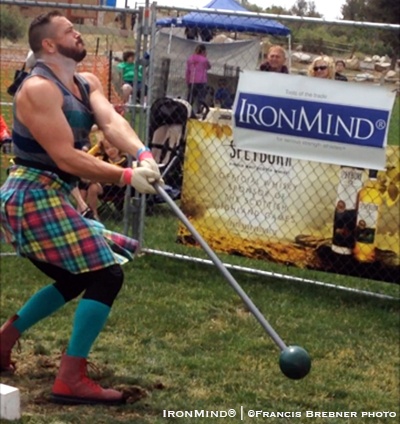 Eddie Brown hammered the field at the Costa Mesa Highland Games, and he has qualified for the IHGF All American Highland Games Championships. IronMind® | ©Francis Brebner photo

IHGF president reports on the Costa Mesa Highland Games, which was the fourth leg of the IHGF All American Championships.

The 28-lb. weight for distance was an exciting slug fest from the first round till the last, with Brown clinching another victory at 72’ 8”. Anthony was second at 70’, with Heaton third at 69’ 3”.

In the 56-lb. weight over bar, Heaton made 16’ on his final attempt for the win. Second place was a tie between Anthony and Brown at 15’ on countback.

The 20-lb. sheaf toss was a triumphant win for Anthony at 27’, with Staggs and Heaton tying at 24’ for second.

Doug Mostyn, president of the SAAA, and athletic director Joe White were delighted with the weekend of Highland athletics and pleased to see a packed line-up in the A group.
Special mention is given to Jarvina Rout, who set two world records in the woman’s lightweight class: 70’ 5’ in the light weight for distance and 51’ 2-3/4” in the heavy weight for distance.

Seven athletes have qualified to date for the IHGF All American Highland Games Championships:

The fifth leg in the IHGF All American series will be at the Pikes Peak Celtic Festival in Colorado on June 17–18.

Monica Battle did an outstanding job in her first year as the festival director, along with Grant Oliver as vice chairperson and Chad Thompson as the athletic director.
###