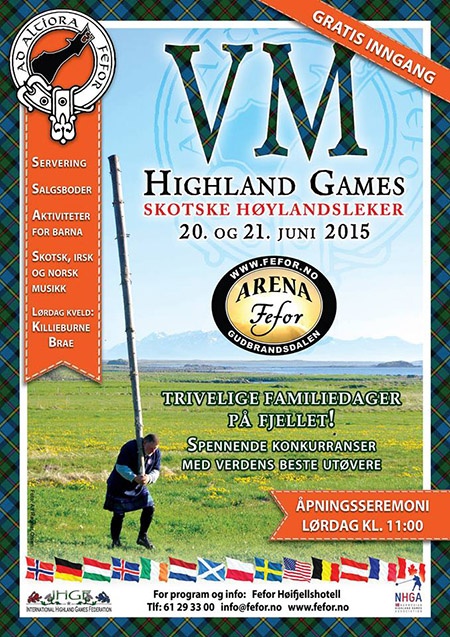 The 2015 IHGF World Amateur Highland Games Championships will be complemented by the IHGF Stones of Strength World Series and the Norwegian Captains of Crush Grippers Championships. IronMind® | Artwork courtesy of IHGF

The official lineup of athletes competing in the 2015 IHGF World amateur Highland Games Championships has been announced by Francis Brebner of the IHGF.

“The Amateur Championships will be held at the historic and luxurious Fefor Høyfjellshotell, Vinstra, Norway, owned and operated by Anne Grethe Horten, from 19–21 June.  In conjunction with amateur championships, the first leg of the IHGF Stones of Strength World Series, 19–21 June, will take place. This competition has been growing in popularity over the past few years and it is a great favorite the fans and spectators.

“Both of these championships will be co-produced by the IHGF, Anne Grethe Horten, and Sveinung Tangstad of the Norwegian Highland Games Association, an affiliated member and representative of the IHGF for Norway. These competitions will be filmed for TV viewing. Also rounding out the action-packed several days of competition will be the Norwegian Captains of Crush Championships,” said Brebner.

Following are the official start lists.