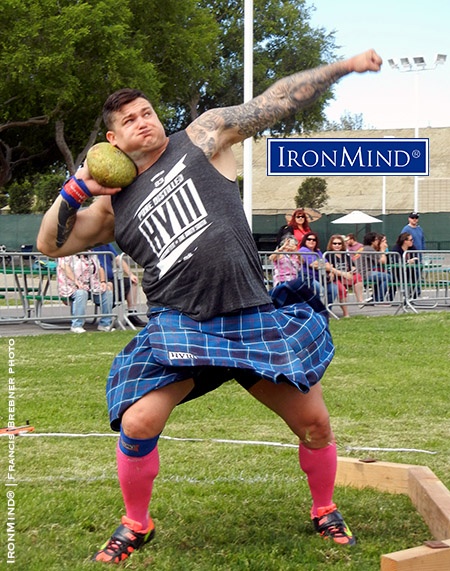 Matt Vincent won the Costa Mesa Highland Games and is taking aim on the IHGF World Championships in Bressuire, France in a couple of weeks. IronMind® | ©Francis Brebner photo

The countdown to the 2015 IHGF Highland Games World Championships has begun and Matt Vincent, a favorite for top honors, showed his stuff at Costa Mesa. Francis Brebner called the action for IronMind.


The Costa Mesa Highland Games in Southern California this past weekend attracted massive crowds once again over its two days of festivities.  More than 80 athletes competed in perfect weather, producing some fantastic throwing in all categories.

The pro class had a top-notch line-up of athletes, including Matt Vincent, Andy Vincent, Dan Williams, Jon O’Neil, Jake Sullivan, Ryan Stewart, and Nick Kahanic.     In the first event with the 23-lb. Braemar stone, all eyes were on O’Neil, the North American record holder, but after three attempts, he could only manage a best of 39’ 4”. The top three in this event, M. Vincent, A. Vincent and Kahanic, did battle round after round with the lead changing hands several times. The win finally went to A. Vincent with a putt of 42’ 3”; second was Kahanic with 41’ 9” and third, M. Vincent with 39’ 6-1/2”, with O’Neil in fourth.

The 56-lb. weight-for-distance was a ding-dong battle and riveting to watch as five athletes all went over 40’ with the lead changing hands on several occasions. The slug fest between Sullivan, M. Vincent and Stewart was epic, with Stewart pulling out the winning throw on his final attempt at a distance of 43’ 6”, followed by Sullivan, who made 42’ 2” to go ahead of M. Vincent by a half inch at 42’ 1-1/2”.

The 56-lb weight-over-bar was a remarkable competition, with five athletes clearing 16’ and A. Vincent going solo for the win at the height of 17’ and later just narrowly missing out on clearing 18’. Of the four athletes on 16’, M. Vincent took second place on countback with fewer attempts and Stewart third place.

Day two of the Costa Mesa Highland Games resumed with the 16-lb. open stone, which for me was the highlight of the pro events over the weekend. Kahanic, the current world record holder in this event, took an early lead with a best of 55’ 2-1/2” in the first round, but this performance was crushed round after round by M. Vincent, who blasted out world-class throws, with a best of 57’ 10”, leaving Kahanic in second. Third place was A. Vincent at 53’ 2-/12”.

The 28-lb. weight-for-distance was exciting as M. Vincent effortlessly produced top throws again and again, with his best being 84’ 3” for his second win of the competition. Kahanic was second at 81’ 9” with Sullivan third at 80’ 2”.  The final event, the 20-lb. sheaf toss, ended with Kahanic, Stewart and M. Vincent all at 30’ with the win on countback going to Kahanic, and a second-place tie between Stewart and M. Vincent.

In talking with the overall champion of the weekend, M. Vincent, I asked how his preparations were going for the IHGF World Highland Games Championships in Bressuire, France in a few weeks’ time. Matt said, “Everything is going well and I can’t wait to get there to compete. I have heard so much great things about the games being one of the best and my whole family is coming with me. I am really going to enjoy it, I know.”