The 2014 edition of the McPherson (Kansas) Highland Games continued in the strong traditional established over the years and IHGF CEO Francis Brebner called the action for IronMind. 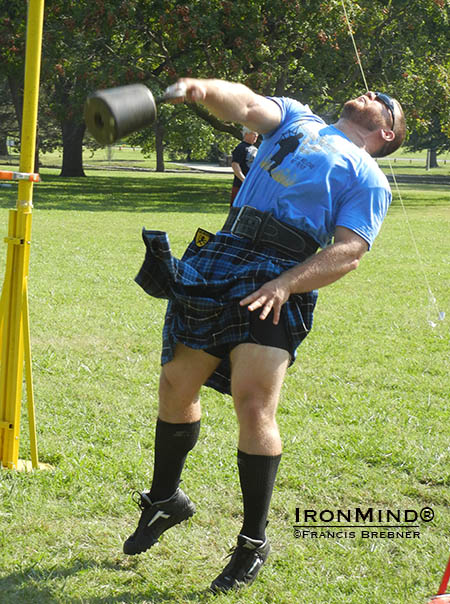 Jon Hereth’s performance caught Francis Brebner’s eye and Brebner marked him for the future: “Jon Hereth will be the new rising star of the future, I predict, if he keeps at it!” IronMind® | Francis Brebner photo

It was a record-breaking weekend at the 2014 McPherson Highland Games in McPherson, Kansas, yet another successful games for its acclaim.  From opening until closing, the games were action-packed with pipe bands, Highland dancing, folk music, clans, and much more.

These games have a fascinating history—they were first started as an exhibition by former pro athlete Al Myers and have grown over the years into one of the leading games in Kansas under the guidance of athletic directors Dave and Gunner Glasgow and Larry and Terri Ventress. The first official year of the established games was 1994, and before that were many years of annual samplers (small evening shows) that Al Myers put on. The first year of the festival came together when the world annual McPherson clan gathering took place in McPherson, Kansas, and its success turned it into an annual festival, which has blossomed into one of the best games in the state of Kansas, according to Al Myers:  “The first year we had many guys there who later turned into big names in the games, Ryan Vierra, Dave Brown, and Karl Dodge to name a few. Dave Glasgow and the Ventresses have done superb work in building the games the past several years, and each year they only get better.”

The highlight of the weekend was the heavy events, with a total of 54 athletes taking part in 9 events over two days of heated competition with no fewer than 16 ground records.

In the men’s A group, rising stars Jonathan Hereth and Skylar Arneson did battle, garnering four wins each. Arneson, who is competing in his second season of Highland games, has made a huge improvement over last year’s throwing; and Hereth, who has been only training for the past eight months, was very impressive to watch in his overall performance. Both have a great future in the sport if they continue, that is for sure.

In the 22-lb. Braemar stone, Hereth and Arneson went at it round after round with mere inches separating the two, with Hereth coming out on top with a putt of 35’ 6”. Second place was Arneson at 35’ 2” and third Matt Thompson at 32’ 11”.

The 28-lb. weight for distance was a very close contest once again, with Hereth pulling off his second victory with a throw of 68’ 2”, followed by Arneson at 67’ 10” and Thomson at 65’.

The final event, the sheaf toss, was won by Thompson on countback at a height of 26’, with Hereth second, also at 26’ and Stout third, at 22’.

The women’s masters 50-plus category was won by Terri Ventress, just recently back from the Masters World Championships in Inverness, Scotland where she won her third women’s world masters title, who had a clean sweep of all nine events.

In the woman’s 40-plus group, Melanie Mellinger put up a great performance as she added four ground records to her credit, winning eight out of nine events.

In the masters 50-plus division, Thom Van Vleck, also just back from the Masters World Championships where he placed third overall in his category, was in fine form, setting four ground records and winning all nine events. 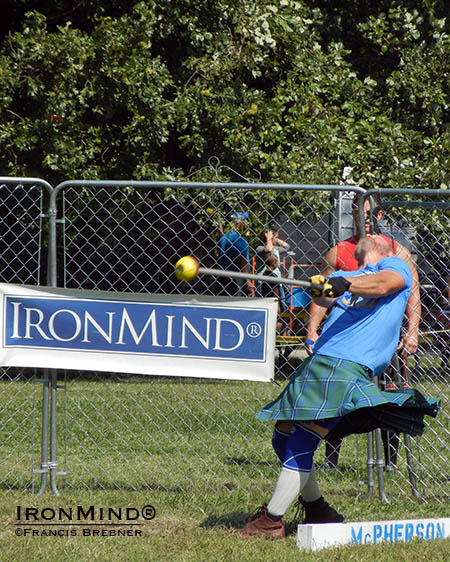