The International Highland Games Federation (IHGF) and the Norwegian Highland Games Association (NHGA) have signed agreements and announced the 2014 IHGF World Amateur Highland Games Championships as well as the IHGF Stones of Strength World Challenge, according to an official statement sent to IronMind. 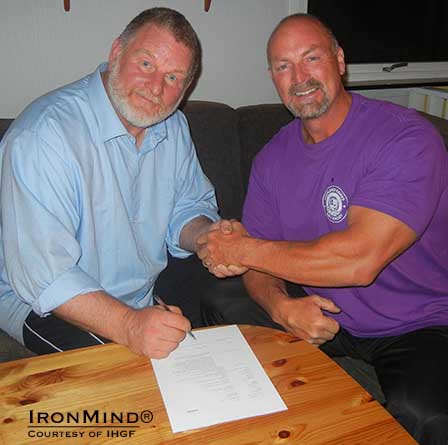 
Following is the official IHGF statement, in full:

Sveinung Tangstad, who has been the official IHGF representative for Norway since 2005, has worked steadily in his country of Norway over the past few decades in promoting Highland Games since he first began throwing. He has encouraged others to follow in his footsteps, promoting the sport in Norway. Sveinung has a real passion for the sport and has given a great deal of his time and attention, especially towards the young generation of throwers coming into the sport, which now has several promising young stars of the future in the making.

Sveinung first envisioned the hosting of a major World class event in Norway several years ago which has now finally all come into fruition finding the perfect location at Marmelkroken, Bø in Andøy where the games will be held. They have furthermore visualization and plans of making Andøy a promising fixture in the International Highland Games circuit for the future. The IHGF are very happy to be working with both Sveinung Tangstad and Lisbeth Seppola who have worked very hard in making both these events come together.

Both events will be filmed for European TV as well as potentially TV here in the USA. They are also working on the possibilities for live streaming of the events. Tryouts for Scandinavian athletes will be held at Marmelkroken during May. The athletes line-up for both the IHGF World Amateur Highland games Championships and the IHGF Stones of Strength World Challenge to be released soon on IronMind.