The 2014 IHGF Stones of Strength World Challenge is set for Norway later this month and IHGF CEO Francis Brebner has filed a report with IronMind, setting the stage. 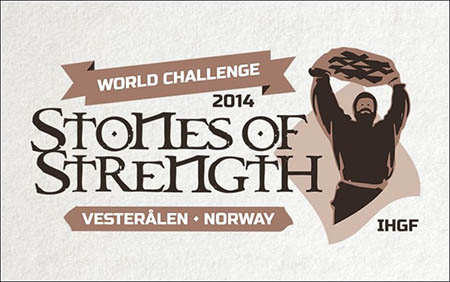 Norway will host the 2014 IHGF Stones of Strength World Challenge.  IronMind® | Artwork courtesy of the IHGF

The stage is set with all athletes secured for this year’s IHGF Stones of Strength World Challenge, which will take place in Andøy, Norway, 27–29 June.  Nine strength athletes from across the globe have been invited to compete in a series of stonelifting tests of strength, including stone putting, lifting, pressing, and stone walking, and a whole lot more.

In last year’s IHGF Stones of Strength World Challenge, István reigned supreme, capturing the overall title, but this year he will have to contend with some new challengers for his crown, like Garrison, Boundy, Lundberg, Lashyn, and top contender Puzser, all of whom have a shot at the title.  Puzser made history in last year’s event as the only man to surpass the myth of the Dinnie Stones, carrying both stones at the same time a staggering distance of just over 18 feet.  This year’s competition will have some hefty stonelifting challenges that will push the athletes to the max of their endurance, stamina, and overall strength capabilities.

The promoter for the event, Sveinung Tangstad, said he was happy to be the host of this year’s IHGF Stones of Strength World Challenge, adding that there is real excitement about this world event coming to Norway.  The entire event will be filmed by two TV networks from Europe and will also be broadcast on live streaming.