It’s the contest and TV show that strongman fans wait for all year—the result of IMG executive vice president Barry Frank’s idea that a lot of people would find it entertaining to watch huge guys perform seemingly impossible feats of strength. 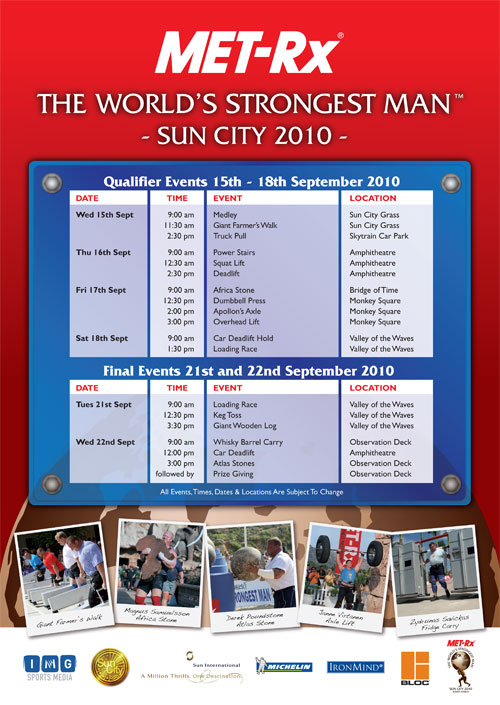 
Frank was right and his 30-something TV show isn’t just followed by many millions of viewers worldwide, it gave birth to the concept of strongman as a strength sport.

This year’s competition is being held in Sun City, South Africa and an on-site source close to the show told IronMind today, “All going well here—just very busy . . . The guys are all in great shape and looking forward to getting started—familiarisation starts tomorrow.”

Familiarization is essential because even though these are the world’s top professional strongmen—a group where someone standing 6’ 6” (2 m) tall and weighing 350 lb. (160 kg) would just be one of the guys—the particular challenges making up this year’s World’s Strongest Man competition, from the Apollon’s Axle to the Whisky Barrel Carry, warrant one’s close attention.

After traveling halfway around the world, one of the competitors told IronMind he was focusing on recharging his batteries and had slept 12 hours his first night in Sun City.  Referring to the start of the qualifying round he said, “We begin Wednesday, so we will have a lot of time to rest, and eat as well.

“Z [defending World’s Strongest Man winner Zydrunas Savickas] looks ready . . . [a] lot of [the] guys are crazy big and huge, but the secret remains not in the HUGEST arms . . . It is in huge heads!”