Larry Brock battled it out with Kerry Overfelt at the Glasgow, Kentucky Highland Games last weekend, and Francis Brebner called the action for IronMind®. 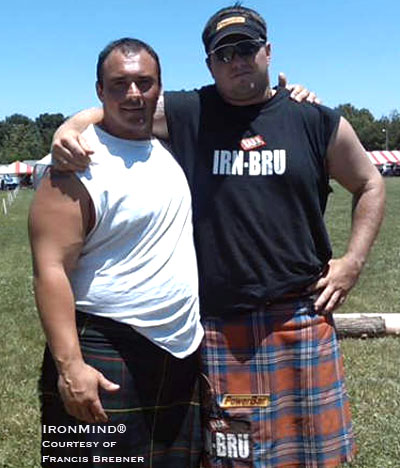 This past weekend’s Glasgow, Kentucky Highland Games saw over 15,000 spectators each day entertained with some of the finest throwing so far this season with a real ding-dong battle between Larry Brock and Kerry Overfelt.

Both days had perfect conditions for throwing far—and throw far they did.  In the opening event with 17-lb. open stone, Craig Smith took the win with a putt of 50’ 2”; in second was Brock with 48’ 7” and in third Overfelt with 48’ 5”.

In the second day of competition, in the weight over the bar Overfelt kept up his winning streak by taking the event with a height of 18’ 6”.  Brock had to settle for second place with 18’, and once again St. Clair was in third place at 16’.

The 20-lb. sheaf toss was again won by Overfelt in yet another dominating performance, at a winning height of 31’.  Brock took second at 29’ and St. Clair third at 27’.

A special note must be added about Kerry Overfelt, the worthy winner of the Glasgow, Kentucky Highland Games, who showed some world-class performances all round.  Look out for Overfelt as a future contender in the World Championships.

Also it must be added that Larry Brock has been suffering from a hip injury this season, and from what I witnessed at Costa Mesa and after hearing the distances recorded by Brock this past weekend, he looks to be well on his way to a full recovery.  Brock did mention that he was happy with his throwing and the way his plans are going for the World Championships in Edinburgh, Scotland in late July.   We’re looking forward to seeing the Brockstar there in action.