Sakari Selkäinaho is organizing and promoting the 2009 European Rolling Thunder® Championships on April 18 in Helsinki, Finland, at the Fitness Classic, with Mark Felix planning to take a world record attempt. 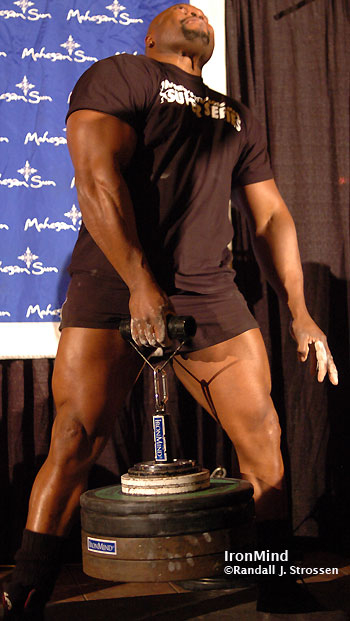 
And if that's not enough, it is also expected that there will be at least one attempt to certify on the No. 3.5 Captains of Crush® Gripper.

"We have a Fitness Classic at April 18 in Helsinki," Sakari Selkäinaho told IronMind®. "The venue is called Kulttuuritalo, and it is five minutes from downtown Helsinki by foot. It's the biggest event in the spring, with four competitions and a miniature EXPO. It pulls 4,000 people in one day." And since the main sponsor of this event is MET-Rx, guess who's bringing in Rolling Thunder® world champion and world record-holder Mark Felix?

"This is real great grip strength event, and many thanks to K.P. Ourama for this opportunity. The 2009 European Rolling Thunder Championships will combine all strength athletes from weightlifting to strongman. I also look forward to seeing Mark Felix here and expect strong support from our gripsters," Sakari Selkäinaho said.

Sakari Selkäinaho is putting up a 300 euro first place prize and IronMind® is putting up a US$100 IronMind® gift certificate to the first Finn to break the 100-kg barrier on the Rolling Thunder®. Certifications on Captains of Crush® Grippers will also be possible at this event, and from what IronMind® hears, don't be surprised to see a successful attempt on the No. 3.5 Captains of Crush® Gripper.

The entry deadline is March 31, with entries going to:

For the rules on getting certified on Captains of Crush® Grippers, please check here:

Captains of Crush® Grippers: Rules for Closing and Certification

Train hard, compete and have fun!