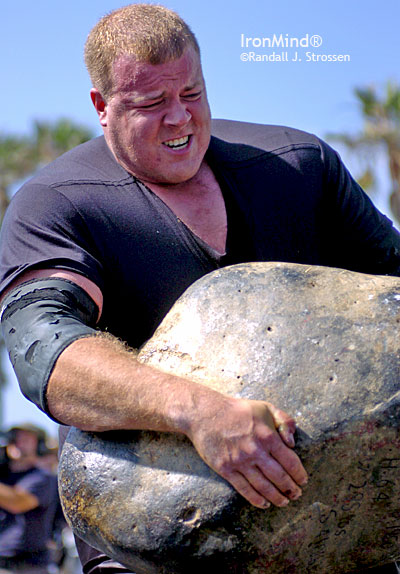 Moving major minerals: Everyone enjoys the beach, but when Dave Ostlund won the 2007 Muscle Beach Grand Prix, he didn't do it by playing in the sand. Ostlund finished third in this year's MET-Rx World's Strongest Man contest, adding another feather to his cap. IronMind® | Randall J. Strossen, Ph.D. photo.

After all, it wasn't just an impressive-sounding title: the contest was going to be open to all comers, it would be drug tested, and it offered US$10,000 to the winner, along with an invitation to the MET-Rx World's Strongest Man contest - all told, it was quite a package that Phil Pfister had put together.

Although this is subject to change, there are several established entry routes to the World's Strongest Man contest: returning as the defending champion, qualifying through a WSM Super Series Grand Prix event, winning a designated national strongman championship, and being selected as a wild card. Currently, even though Americans were prevalent in the field of the 2008 MET-Rx World's Strongest Man contest and two made the podium - Derek Poundstone and Dave Ostlund - both earned their invitations through WSM Super Series, but as Dave Ostlund pointed out, "Super Series is basically an international series and it would be nice for Americans to have a way to qualify for World's Strongest Man directly."

Considering the size of the carrot, it should be expected that America's Strongest Man will draw a lot of attention, and every aspiring American strongman who sees himself as the next WSM title contender would like to throw his hat in the ring, so how to decide who gets invited to compete in the 2009 America's Strongest Man?

Several clear possibilities exist. For example, a list comprising what is is seen as the top American strongmen could be used, and invitations could issued starting at the top and working down until all the places are filled. This approach could include top competitors on the professional circuit and could maybe open things up to some guys who have not quite hit this level yet - for example, while ASC pro cards may be seen by some as a remnant of the days of IFSA-USA, the concept of strongmen working their way up a ladder holds merit, especially when the field of competitors expands and the stakes increase, so some way of rating past performances can add value to the vetting process.

Alternatively, the contest organizers could either hold regional qualifiers, not unlike the system leading up to Britain's Strongest Man, and these could be run, for example, as either independently organized contests (possibly letting different promoters bid on the right to hold such a contest), or through an agreement with NAS, which has the pieces in place to coordinate at least the operational aspects of this sort of contest.

A third option is that the field could be opened up and an initial qualifying round could eliminate all but the top competitors, who would then go on to the finals.

Each of these options seems viable and could lend itself to a dramatic buildup, although the last one seems to offer the most potential . . . a walk-on who few knew about slays the field in the qualifying round, reaches the podium in America's Strongest Man, goes on to win World's Strongest Man and, five movie deals later, runs for governor, wins and lives happily ever after.