The FitExpo is California's largest fitness event and the 2009 edition will once again feature Odd Haugen's All-American Strongman Challenge. 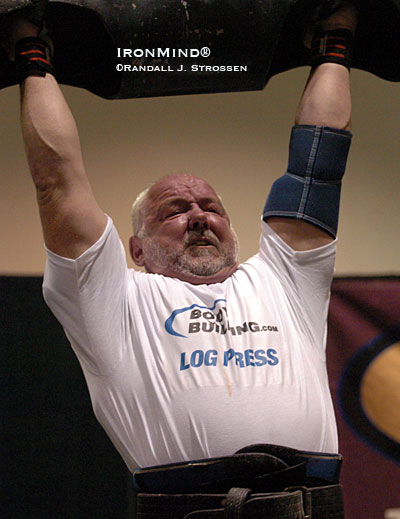 Odd Haugen on the log press at the 2008 All-American Strongman Challenge, a strongman contest he founded and which will be returning to the 2009 FitExpo. IronMind® | Randall J. Strossen, Ph.D. photo.


Although he said the details are not yet set, contest founder Odd Haugen told IronMind® today that the contest is "open to all American pros," and that contest name aside, the organizers "will also accept some international competitors." In addition, Haugen confirmed that the "prize money is $10,000," which puts the contest in the upper tier for American strongman contests. Perhaps even more attractive, the winner of this strongman contest is guaranteed an invitation to a 2009 World's Strongest Man Super Series Grand Prix, a principal gateway to gaining an invitation to compete in the 2009 World's Strongest Man contest.

Although the All-American Strongman Challenge will start with a broad base of competitors, expect the field to be whittled down during the contest, as Haugen also told IronMind®,"There will probably be three qualifying events [to] cut the field to 12 [competitors], and [then] four final events."

The FitExpo, sponsored by Gaspari Nutrition and Bodybuilding.com, is scheduled for January 24 - 25, so make your plans to attend. For full event details, please check the official FitExpo